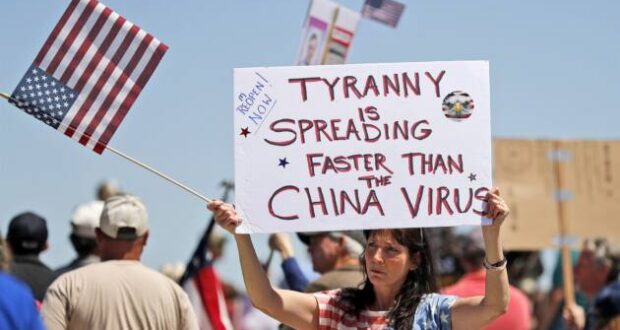 Protestors frustrated by Missouri’s stay-at-home order took their message to the streets of Jefferson City outside the state capitol on Tuesday, StlToday.com reported. Many of the several hundred protesters waved the American flag and chanted “USA! USA!” A sign on a car window stated, “I prefer dangerous liberty over peaceful slavery!”

Gov. Mike Parson last week extended the statewide stay-at-home order to May 3 but said that starting May 4, some businesses will be allowed to reopen, with some restrictions such as limits on the number of people allowed inside.

Nikki Evers of Eugene, Mo., told the Jefferson City News-Tribune that she hopes the state reopens sooner. she runs a credit union but also owns a couple of businesses that have had to shut down, and she’s having to take out a private loan to get them back open again.

She is the organizer of one of the groups involved with Tuesday’s rally, a Facebook group called “End the Stay – Governor Parson.” Evers wanted it to be enough to reopen the economy if people who are sick don’t go to work or don’t send sick children to school. She’s been helping elderly in-laws by shopping for them and said once her businesses open, people could call ahead and she would offer curbside service.

“Everybody needs to help each other,” she added.

Statewide, 16 new deaths from the coronavirus were reported in Missouri on Tuesday, bringing the total to 215, according to Johns Hopkins University’s Center for Systems Science and Engineering. The number of cases rose by 156 to 5,963.

Jackson County will provide temporary emergency housing for homeless people who have tested positive for the coronavirus, the county’s Democratic executive, Frank White, announced. The agreement with the Greater Kansas City Coalition to End Homelessness provides housing at the Salvation Army Kansas City Three Trails Camp for up to 12 weeks. County lawmakers approved $450,000 for the program on Monday.

Fifty local public health agencies also have issued orders, according to a count maintained by the Department of Health and Senior Services. Both Parson and Dr. Randall Williams, director of DHSS, said counties would be able to maintain their own health orders after the state’s lifts. Federal health officials have recommended limiting face-to-face contact with others as much as possible.

The protests came as a new Reuters/Ipsos opinion poll shows that a bipartisan majority of Americans said they want to continue to shelter in place to protect themselves from the coronavirus, despite the impact to the economy. The national online poll from April 15-21 shows that 72 percent of adults in the U.S. said people should stay at home “until the doctors and public health officials say it is safe.” That included 88 percent of Democrats, 55 percent of Republicans, and seven in 10 independents.