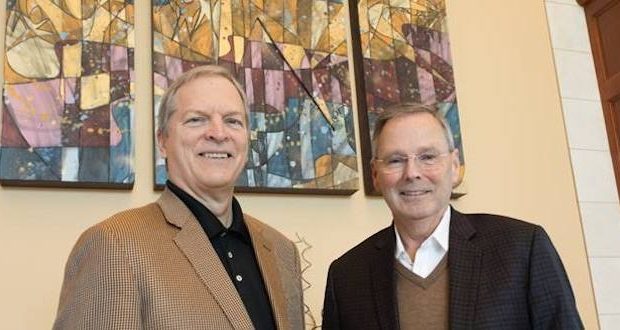 Dr. Dan Rexroth is the president and CEO of John Knox Village, Lee’s Summit, Missouri, Tim Buchanan is the CEO of Legend Senior Living, LLC., Wichita, Kansas. Both have served on MNU’s Foundation and Board of Trustees. Not pictured: Gail Buchanan and JoAnne Rexroth, Bright Futures executive committee co-chairs.

MidAmerica Nazarene University leaders today announced that they anticipate donations to its largest-ever capital campaign will surpass $40 million in the next few days. With more than two-thirds of the Bright Futures campaign’s $60 million goal achieved, the university is thanking donors for gifts that will be used in three strategic areas.

“Several recent gifts have moved us significantly closer to our goal,” say Tim and Gail Buchanan, co-chairs of Bright Futures executive committee. “We’re so grateful for this support from friends of MNU, alumni, corporations and foundations that share a passion for investing in students, strong academics, capital improvements and overall university support.”

Additionally, student scholarships, academic support endowments and unrestricted endowments are now over 90 percent funded. Dr. Dan Rexroth, also co-chair of the campaign’s executive committee, is pleased with the success. Rexroth believes everyone should have the opportunity for higher education and says giving for scholarships is vital.

Mabee Learning Commons on the Campus of MNU.

“Neither of my parents had a college degree. They saw the importance of higher education but couldn’t pay for that,” Rexroth says. “So, there were people who came beside me and helped me. I think there are many students just like that, who need a little bit of help. I am very passionate about that.”

The third prong of the campaign is for capital improvements that enhance the student experience at MNU. Already the university has been able to renovate the Mabee Learning Commons, home to the library and the Center for Academic & Professional Success. In 2016 the university redesigned and upgraded the campus technology network with fiber optics and this year completed a technology refresh.

“We are building foundations for the future and an environment for learning and living that provides exceptional facilities, advanced technology and endowment- based resources for years to come, ” says Dr. David Spittal, MNU president. “The beautiful new Cunningham Student Center and improvements to athletic facilities will provide greater opportunities for our students and expanded access and resources for the Olathe community.”

As the Bright Futures campaign progresses toward the $60 million goal, volunteers continue the effort to fund every part of the campaign.

“If you haven’t already contributed, this is a great time to join us,” Rexroth says. “Your gift will make a difference in the lives of others for years to come.”

Learn more about the campaign at BrightFutures.mnu.edu.