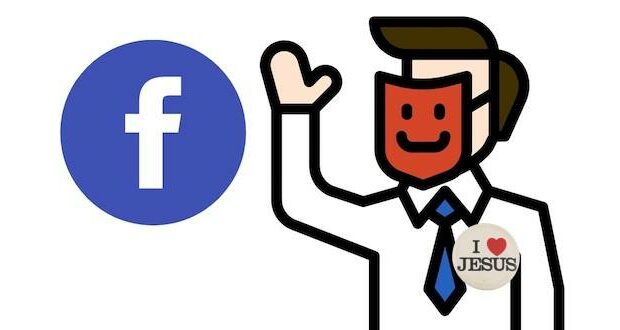 The top ranked Christian Facebook pages had generic names — Jesus is my Lord, Purpose of Life, Light of the World, Blessing and Blessed — and they promoted generic content — Bible verses, inspirational stories and encouraging lessons. They’re all fake.

But other popular Facebook pages, including those for African Americans, were also fakes. They were created by Eastern European troll farms that stole content from legitimate pages and reposted it on their own pages.

It was all part of an elaborate effort that used engaging content to attract large and unsuspecting audiences to pages that were also used to distribute partisan political stories designed to influence voters — and divisive stories about hot-button issues like race and sexuality designed to pit American against American.

All but one of the top 20 Christian Facebook pages operating in Oct. 2019 were fake, according to an internal Facebook report entitled “How Communities Are Exploited on Our Platforms” that was publicly released by the Massachusetts Institute of Technology in September. 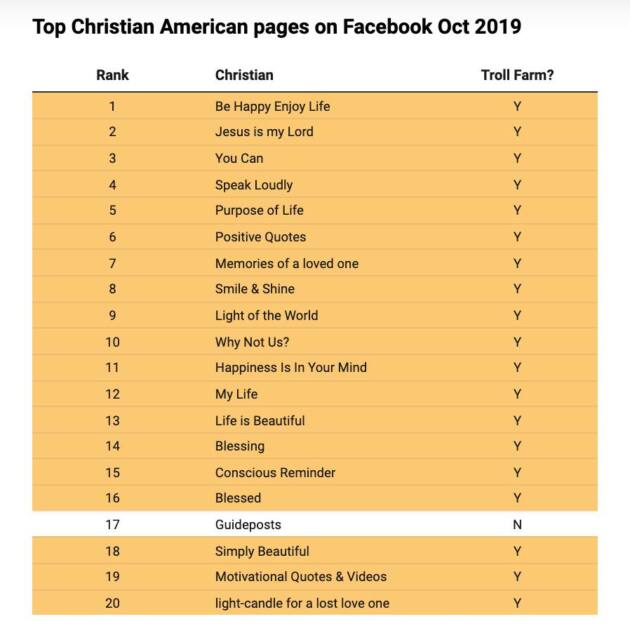 Guideposts was the only legitimate page to be found among the 20 most popular Christian Facebook pages.

“This is not normal,” said the Facebook report, which was authored by Jeff Allen, a former data scientist for the powerful and profitable social media company. “This is not healthy. We have empowered inauthentic actors to accumulate huge followings for largely unknown purposes.”

Christian pages weren’t Facebook’s only top-ranked fakes. The majority of the most popular pages for African American and Native American audiences were also created by troll farms, which are professional groups in Kosovo, Macedonia and other countries that work in a coordinated manner to provide provocative content and political propaganda.

“These pages were part of a larger network that collectively reached nearly half of all Americans,” wrote Karen Hao, senior AI editor for the MIT Technology Review. “Troll farms reached 140 million Americans a month on Facebook before (the) 2020 election.”

Fake news generates more clicks — and more profits — than the truth on Facebook, which earned $9.5 billion in profits in the first quarter of 2021.

The company claims it is committed to aggressively policing its pages. “We lead the industry in stopping bad actors online,” the company bragged in an ad campaign launched Oct. 1, a day after a Facebook executive testified at a testy U.S. Senate hearing.

The hearing focused on revelations from another bombshell internal Facebook report. This one found that a third of teen girls using the photo-sharing app Instagram, which is owned by Facebook, suffers mental and emotional harm. The report surfaced as Instagram announced a new app targeting preteen users.

Facebook’s internal report said its self-policing approach is like “a whack-a-mole strategy that involved monitoring and quashing the activity of bad actors when they engaged in political discourse.”

Five of the fake pages Allen identified in his Oct. 2019 internal report, including the Christian site Purpose of Life, were still thriving when MIT Technology Review published its article in Sept. 2021. A Facebook employee secretly provided a copy of the internal report, which is available on the Review’s website.

Facebook profits from leading millions of users to fake sites. The company’s proprietary and secretive algorithms routinely recommend fake pages to users, 75% of whom had never visited the fake pages before Facebook promoted them through users’ news feeds.

“A big majority of their ability to reach our users comes from the structure of our platform and our ranking algorithms, rather than user choice,” said Allen in the internal Facebook report. “How did we get here?”

Allen cited another blatant Facebook failure that has allowed fake pages to multiply and attract large audiences: Bad actors “write python scripts that scrape social media and anonymously regurgitate content into communities,” but Facebook does little to enforce its own rules against such practices.

At times, up to 40% of U.S. page views went to fake sites that stole content from legitimate sites and repacked it into irresistible nuggets of clickbait and engagement bait. As Allen observed, “Our platform has given the largest voice in the Christian American community to a handful of bad actors, who, based on their media production practices, have never been to church.”

Facebook deserves plenty of blame for the popularity of its fake pages, but so do gullible users who fail to perform what Allen called “Basic Media Literacy Checks.”

That portion of the Facebook report brought a hearty “Amen!” from Chris Martin, a social media and communications consultant whose Terms of Service newsletter linked to the MIT report.

“A lot of Christians are not using discernment when engaging on social media,” said Martin, a content marketing editor for Moody Publishing who previously led social media strategy for Lifeway Christian Resources.

“Christ cared about the truth,” he said. “It reflects poorly on Christians and Christian thinking when we believe this crap. It’s depressing.” 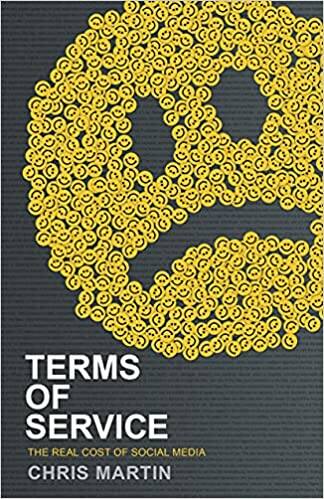 Martin is passionate about helping Christians “push back against the hold the internet has” on their minds and hearts. Pushing back requires social media literacy, the subject of Martin’s upcoming book, “Terms of Service: The Real Cost of Social Media” (B&H, Feb. 2022).

“You may be innocently visiting a Facebook page to read Bible verses, or inspirational quotes,” said Martin. “You have these Eastern European groups that are amassing millions of Facebook followers.

Martin says that instead of practicing discernment, too many Christians engage social media content therapeutically, and that doesn’t bode well for discipleship or democracy.

“They use content to make themselves feel good, like narcotics, and they don’t care where it comes from as long as it makes them feel good. But the payoff is that we are supporting groups engaged in cultural hacking, groups that are injecting more conflict and discord into American culture.”

This article is republished with permission from MinistryWatch.

–Steve Rabey is a Colorado journalist and author who has written more than 50 books on religion, spirituality, and culture. His articles on religion have appeared in The New York Times, Washington Post, Los Angeles Times, Religion Unplugged and dozens of Christian publications. He is a former instructor at the U.S. Air Force Academy and at Fuller and Denver seminaries.

Metro Voice is an Amazon Associate and as such, your browsing the site supports our journalistic efforts. Even when you don’t purchase the featured item.