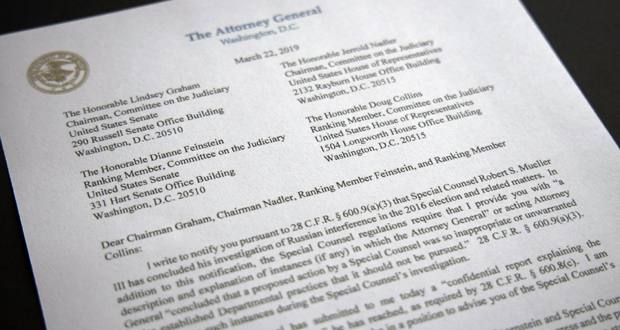 Barr now begins the job of deciding what information from the report will be made available to Congress and what will be shared with the public.

“I may be in a position to advise you of the special counsel’s principal conclusions as soon as this weekend,” Barr wrote in the letter.

White House Press Secretary Sarah Huckabee Sanders announced shortly after the report was delivered to Barr that no White House officials had yet examined it.

It is being reported that Mueller has indicated that there will be no further indictments related to his investigation.

Here is the text of the letter:

I write to notify you pursuant to 28 C.F.R. 600.9(a)(3) that Special Counsel Robert S. Mueller III has concluded his investigation of Russian interference in the 2016 election and related matters. In addition to this notification, the Special Counsel regulations require that I provide you with “a description and explanation of instances (if any) in which the Attorney General” or acting Attorney General “concluded that a proposed action by a Special Counsel was so inappropriate or unwarranted under established Departmental practices that it should not be pursued.” 28 C.F.R. 600.9(a)(3). There were no such instances during the Special Counsel’s investigation.

The Special Counsel has submitted to me today a “confidential report explaining the prosecution or declination decisions” he has reached, as required by 28 C.F.R. 600.8(c). I am reviewing the report and anticipate that I may be in a position to advise you of the Special Counsel’s principal conclusions as soon as this weekend.

Separately, I intend to consult with Deputy Attorney General Rosenstein and Special Counsel Mueller to determine what other information from the report can be released to Congress and the public consistent with the law, including the Special Counsel regulations, and the Department’s long-standing practices and policies. I remain committed to as much transparency as possible, and I will keep you informed as to the status of my review.

Finally, the Special Counsel regulations provide that “the Attorney General may determine that public release of” this notification “would be in the public interest.” 28 C.F.R. 600.9(c) I have so determined, and I will disclose this letter to the public after delivering it to you.

Senate Minority Leader Chuck Schumer and House Speaker Nancy Pelosi issued a statement calling on Barr to make the report available to Congress immediately and warned him not to give the White House a “sneak preview” before doing so.

“It is imperative for Mr. Barr to make the full report public and provide its underlying documentation and findings to Congress,” the statement read.

Mueller’s investigation began in May 2017, and has yielded substantial evidence of an extensive Russian influence operation designed to sway the election, but the special counsel has not, as far as is known, produced any evidence that anyone associated with the Trump campaign assisted in the effort.

Several dozen Russian entities and individuals were indicted for their role in hacking the Democratic National Committee’s servers and spreading disinformation on social media in an attempt to disrupt the 2016 election. This is a mostly symbolic gesture since they cannot be extradited to the U.S.

Six Trump aides were also indicted on charges that largely resulted from their having lied to Congress and federal investigators.

President Trump expressed a desire for the report to be made public when speaking to reporters this week.

During his Senate confirmation hearing, Barr vowed to make public as much information from the report as possible.

Department of Justice guidelines require only that Mueller explain in his report to Barr why he sought, or declined to seek, criminal charges against suspects in the probe. As a result, the report may not provide a detailed accounting of his investigation.

Previous: The Golan Heights is rightfully Israel’s, Trump acknowledges
Next: Millennials are experiencing American prosperity; the Mueller report; and that young mayor guy