Home / News / No crisis? Border Patrol nabs over 700 illegal immigrants in one night 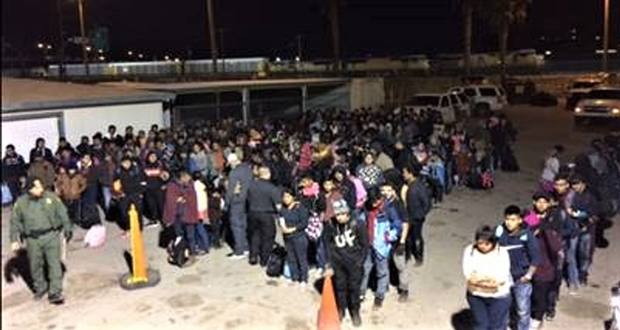 Remember that “manufactured border crisis” the media was accusing the Trump administration of ginning up?

Well, it seems there might be a crisis after all.

According to a press release from U.S. Customs and Border Protection, more than 700 illegal immigrants were caught in one sector earlier this week, including two sex offenders who had been previously deported from the country.

“U.S. Border Patrol agents working in El Paso apprehended several large groups between last night and late afternoon Wednesday. These groups, like many others before, are comprised primarily of Central American families and unaccompanied juveniles,” a statement from CBP read.

“Agents apprehended a group of 112 illegal aliens at the border wall near downtown just after midnight. At about the same time agents working further east were processing a group of 252 aliens apprehended at the border just west of Bowie High School. Throughout the morning hours several smaller groups also arrived at multiple locations along the border in the El Paso metropolitan area. In just a few hours the total number taken into custody exceeded 500.  An unaccompanied 2-year-old child was also found among one of the groups. The U. S. Border Patrol is currently working with international and domestic agencies in order to locate the parent(s).

“While dealing with this influx of illegal aliens Border Patrol Agents also arrested two convicted sex offenders attempting to enter illegally while the agents were preoccupied with the large groups,” the statement continued.

“Agents in far-east El Paso County also arrested a group of six in which a subject, a 28-year-old U.S. citizen, self-proclaimed prison gang member, was found to have an outstanding federal warrant for escape. In addition, the subject has a lengthy criminal record. The subject was remanded to the custody to the U.S. Marshals Service. The other five aliens are currently being processed accordingly.”

The release went on to note that data released Tuesday showed “the record number of apprehensions of inadmissible family units border wide. The data showed the greatest increase in the El Paso Sector where family groups are up 1,689% when compared to same period last year.”

Indeed, even The New York Times was forced to note in a headline that “Border at ‘Breaking Point’ as More than 76,000 Unauthorized Migrants Cross in a Month” in response to the data.

“The number of migrant families crossing the southwest border has once again broken records, with unauthorized entries nearly double what they were a year ago, suggesting that the Trump administration’s aggressive policies have not discouraged new migration to the United States,” the story read.

“More than 76,000 migrants crossed the border without authorization in February, an 11-year high and a strong sign that stepped-up prosecutions, new controls on asylum and harsher detention policies have not reversed what remains a powerful lure for thousands of families fleeing violence and poverty.”

Vice President Mike Pence noted the headlines on Twitter and incongruence with the general media message: 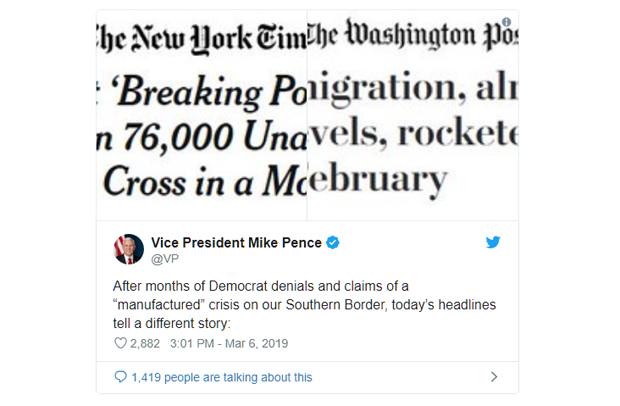 ‘Claim?’ The border is at a “breaking point” according to The New York Times and family migrations “rocketed to new high” according to The Washington Post, but some say it’s still just a claim and Pence is trying to opportunistically use the facts to support his case.

There’s a crisis at the border. People on the left and right agree. People who say otherwise have their heads in the sand or simply adhering to a political agenda.

Whether an emergency declaration is the right way to get a wall built is another debate entirely, but it’s obvious a barrier needs to be built.