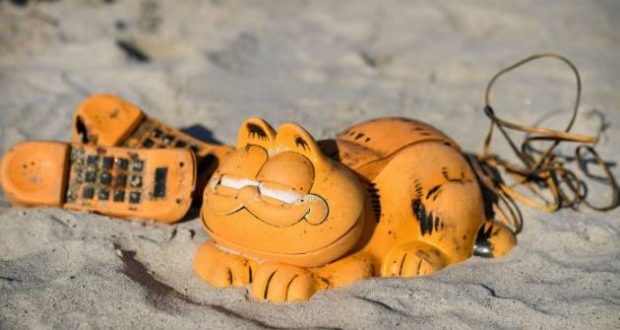 A decades-long mystery behind Garfield phones appearing on the far western shores of France has finally been solved.

For more than 30 years, novelty landline phones in the shape of the orange tabby cat, featured in Garfield comics, books, movies, and television, have washed-up on the beaches of northern Finistere and left local beach cleaners guessing where they came from.

“Our association has existed for 18 years and in that time we have found pieces of Garfield telephones almost each time we clean,” Claire Simonin, who leads beach cleaning group Ar Viltansou in Brittany, told AFP.

Garfield is the brainchild of Jim Davis, who created the comic book character in 1978 and won acclaim for the cat’s laziness, obsession with eating, coffee drinking, and loathing of Mondays and diets. The dry-witted character inspired Garfield: The Movie (2004) and Garfield: A Tail of Two Kitties (2006), starring American comedian Bill Murray as the voice of the cat, as well as merchandising worth hundreds of millions of dollars annually.

For years rumors had spread through the community about a lost shipping container that was slowly releasing the old phones and littering the beaches for decades. A local finally admitted he had seen the container after a storm hit back in the 1980s. Ar Viltansou then located it in a partially submerged cave that could only be entered safely at low tide.

“We found this incredible fissure that is 30 meters (100 feet) deep and, at the very bottom, there were the remains of a container,” Simonin said after the expedition. “Under the boulders in front of the entrance, we found 23 complete handsets with electronics and wires, they were everywhere.”

Although the phones have been traced back to the source, how the shipping container ended-up in the underwater cave remains a mystery.

“We have no idea what happened at the time: we do not know where it came from, what boat,” Iroise Marine Nature Park Director Fabien Boileau said. “We don’t know if several containers fell into the water, or only one.”

Anti-pollution activists believe the phones are a good example to show how slowly plastics break down, even after spending decades in the ocean.

“Seeing these plastic phones on the beaches, especially so long after the incident, is a stark reminder of the persistence of plastic waste in the ocean,” Plastic Oceans Foundation Co-founder Jo Ruxton said. “Plastic was designed not to break down and large items like these being hardly weathered after 30-40 years is a clear indication of this.”

According to the foundation, the world manufactures more than 300 million tons of plastics each year and at least five trillion plastic pieces are estimated to be floating across the world’s oceans.

The Ellen MacArthur Foundation’s Project MainStream separately predicted in 2016 that unless consumer demand for plastic changes, there will be more plastic in the sea than fish by the year 2050.

Compared to the packaging industry, lost shipping containers account for a small proportion of global pollution, with 1,390 units reported missing in the year 2017, according to the World Shipping Council.

In comparison, phones are not dumped in the sea very often. However, the plastics in the phones will eventually become so weathered they will become brittle and break into smaller fragments, according to Ruxton.

“Eventually they become so small that they are mistaken for plankton and are eaten by marine animals and become part of the food chain that leads to us,” she said.

The long-term effects of plastic on humans is still unknown, and governments have started to attempt to reduce the level of plastics that reach the ocean.

The European Parliament recently approved a proposal to ban the top 10 most common single-use plastic products in Europe by 2021.