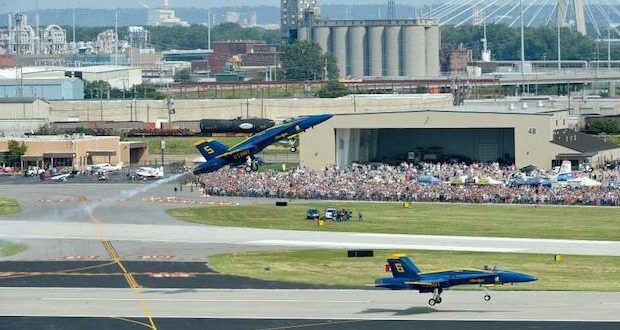 The Navy's Blue Angels fly over the downtown airport in Kansas City, Missouri.

The U.S. Navy is making a “port call” in Kansas City for Navy Week, the first in the city since 2015, will take place June 28 – July 4. It concludes with the Kansas City Air Show featuring the Navy Blue Angels.

Kansas City Navy Week will bring sailors from different Navy units across the U.S. to conduct focused outreach with members of the community. It’s one of 13 Navy Weeks in 2021. Each year, the program reaches more than 60 million people across the U.S.

Navy Weeks consist of a series of outreach events coordinated by the Navy Office of Community Outreach designed to give Americans an opportunity to learn about the Navy, its people and its importance to national security and prosperity. Since 2005, the Navy Week program has served as the Navy’s flagship outreach effort into areas of the country without a large Navy presence, providing the public a firsthand look at how the Navy deters aggression and preserves freedom of the seas.

“During a Navy Week, approximately 75 outreach events are coordinated with corporate, civic, government, education, media, veterans, community service and diversity organizations in the city,” said Cmdr. John Fage, director, Navy Office of Community Outreach. “This will be the first time Kansas City has hosted a Navy Week since 2015, and the Sailors are looking forward to interacting with the citizens of Kansas City and their neighbors. They’re excited to share their experiences and to show everyone why the Navy is so important to the American way of life.”

The Navy’s senior executive participant will be Rear Adm. Francis Morley, Director, Navy International Programs, Office of the Secretary of the Navy. Rear Adm. Morley will participate in various ceremonies and meet with local businesses, civic, education and government leaders during the week.

“I am honored to be representing the United States Navy in Kansas City,” said Morley. “I look forward to connecting with the community to help illustrate how the Navy and our Sailors protect and defend America and its interests worldwide.”

Highlights during the week include:

During the week, sailors from Missouri’s namesake ships, USS Kansas City (LCS 22) and USS Harry S. Truman (CVN 75) will also be visiting the city to volunteer with several youth and community programs including Boys and Girls Club and YMCA.

The week will conclude at the Kansas City Airshow, Saturday, July 4, which will feature performances by the Navy’s premier flight demonstration squadron, the Blue Angels,  where attendees can interact with their U.S. Navy sailors throughout the day.

The full schedule of events will be available on https://outreach.navy.mil/Navy-Weeks-2021/Kansas-City/, as well as on Facebook at https://www.facebook.com/NavyOutreach.