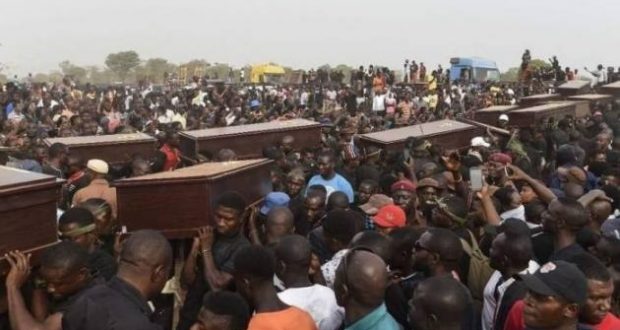 Nigerian Christians fear they will be ‘extinct’ as more villages burn

The Nigerian genocide against Christians continued this week as Fulani Muslim herdsmen burned hundreds of homes. The attack killed 13 people on Monday, including three children, and destroyed four Christian villages in the West African country.

Reports indicate that at least four predominantly Christian villages in two Nigerian states suffered attacks at the hands of suspected Fulani herdsmen on Monday. The villages were completely destroyed and villagers are now left displaced.

The third and fourth attacks occurred in villages in the Riyom local government area of the Plateau state.

The attacks come as thousands of Christian farmers and their families have been killed in the last few years in violent attacks carried out by extremists from predominantly Muslim nomadic Fulani herding communities.

Residents in Kaduna who spoke with the persecution news outlet said that an estimated 200 armed Fulani herdsmen invaded their village on Monday.

In the attack, four Christians were said to have been killed, including 8-year-old Monday Yahaya, 9-year-old Zhime Danladi and 17-year-old Samson David.

“They were all buried today after a brief prayer at the grave site,” resident Thomas John told Morning Star News.

Monday’s killings in Kaduna were confirmed by the Kaduna Police Command, according to the Nigerian newspaper The Punch. Public relations officer Yakubu Sabo confirmed that the attack occurred at 2:45 p.m. on Monday.

“Teams of policemen quickly moved to the area, evacuated the dead bodies to the hospital and ensured that the situation was brought under control,” Sabo was quoted as saying.

Sao believes the attack on the predominantly Christian community might have been in retaliation for an attack on a Fulani camp in the area earlier that day though the attackers were not identified as Christians though Christians are beginning to arm themselves and retaliate.

As violence against farming communities in the Middle Belt continues, Christians are expressing their outrage over the government’s description of Fulani radical attacks as a “farmer-herder conflict.”

Lawrence Zongo, the publicity secretary of the Miango Development Association, told The Sun newspaper that radicals burned down all the homes in the village and destroyed all farms.

“Presently all the villagers are displaced,” Zongo explained.

Zongo also said there was another attack that occurred around 5 p.m. in the Kikoba village in Kauru.

“[A]ll houses were burnt and razed down, farms destroyed, the villagers were also displaced,” he said.

Kikoba resident, 51-year-old Matthew Nasamu, told Morning Star News that one woman was killed and another was kidnapped.

He said 93 homes belonging to Christians were destroyed in Kikoba.

According to The Sun, no fewer than seven people were said to have been killed by the suspected Fulani militants in the attacks on both villages in the Kauru local government area.

Zongo confirmed for Morning Star News that three people were killed in Kangbro village. A fourth victim was taken to the hospital to be treated for gunshot wounds.

Kangbro resident Patience Moses told Morning Star News that one of the churches burned was part of the Evangelical Church Winning All denomination, while the other was a Catholic church.

Moses added that 185 homes were burned and destroyed, causing all the villagers who survived the attacks to be displaced.

Zongo told Morning Star News that six Christians were shot dead in a second attack that occurred in nearby Nakai Danwai, where at least 54 houses were burned.

Nigeria ranks as the 12th worst nation in the world when it comes to Christian persecution, according to Open Doors USA’s 2019 World Watch List. A large reason for such a high ranking is the Fulani violence against predominantly Christian farming communities.

Earlier this month, Nigerian victims of Fulani violence traveled to Washington, D.C., to detail how their villages were massacred by Fulani radicals and victimized by the government.

Like the villages attacked in Kaduna and Plateau states this week, their villages are now completely displaced.

The Nigerians voiced concern with the fact that Nigerian and state governments haven’t done anything to hold Fulani terrorists accountable for the death and destruction they have caused.

“Right now my tribe is nonexistent legally,” Alheri Magaji, the daughter of the leader of the Adara Chiefdom, said at a Heritage Foundation event in Washington. “Part of the reason why I am here is to try to get my land back. That is who I am. That is my identity. That is what makes me. My people are stranded. They are literally sleeping under the skies, on the floor [with] no houses, no food, nothing. It is not about relief materials and how much we can donate. It’s about holding the government accountable.”

She fears her tribe, which was the target of deadly Fulani attacks earlier this year in Kaduna, will soon go “extinct.”

“There is a genocide going on,” she said. “Every morning we wake up to different stories.”