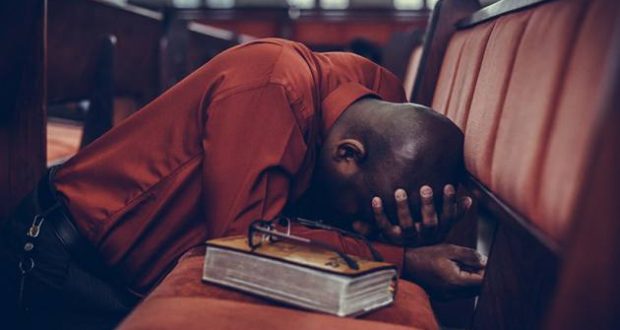 A Burkina Faso Christian man prays in church. The community is under siege by Muslim Jihadists.

‘No Christian anymore,’ as 19 killed in Burkina Faso villages

At least 19 Christians were killed in an attack June 9 on the village of Arbinda in Africa’s northern Burkina Faso causing a mass migration of Christians from their villages, the AFP reports.

According to Barnabas Fund sources, the number of those killed may be as high as 29 as 10 more people were reportedly murdered in the nearby Namentenga province the next day.

“There is no Christian anymore in this town (Arbinda),” said a Barnabas Fund source. He added that 19 people were killed and that the entire population of Christians had fled for their safety.

“It’s proven that they were looking for Christians,” the source continued. “Families who hide Christians are killed. Arbinda had now lost in total of no less than 100 people within six months.”

“Several dozen armed men carried out an attack on the district of Arbinda, shooting several people dead,” an official told the AFP.

News media in France and Britain have begun covering the genocide of Christians in their former colonies while the American media remains, for the most part silent on the issue.

Local Barnabus Fund sources revealed 82 pastors and 1,145 Christians from 151 households, were fleeing from different locations in the northern part of the country.

The attacks began in April in the town of Silgadji, when Islamic militants held a pastor, his son, and four of the pastor’s congregation at gunpoint. They demanded the six deny their Christian faith and convert to Islam.  When they refused, the entire group was executed.

“Since 2012, there has been a rise in anti-Christian rhetoric. The radical ideology which includes demanding that Christians convert has been spread by groups such as Ansarul Islam, the Group to Support Islam and Muslims and Islamic State in the Greater Sahara. The Gulf States have also contributed to fund the emergence of a radical form of Islam in Burkina Faso and elsewhere,” said Edward Clancy, the director of outreach for ACN.

Beginning in 2015, he said “the rhetoric has turned to violence against Christians and now the violence is ratcheting upward in an attempt to drive Christianity from West and Central Africa.”

The Gulf Arab states include Saudi Arabia, Kuwait, Qatar, and the United Arab Emirates. The conservative Wahhabi version of Sunni Islam is practiced in much of the oil-rich region, and its proponents have used their wealth to spread their religious influence into areas where a more moderate version of Islam has been traditionally practiced.

On April 29, 2019, terrorists arrived at one church after a Sunday church service to force Christians to deny their faith in Jesus. When the pastor refused, he and his young daughter, son-in-law, and three others were killed.

This is the reality for our brothers and sisters in Burkina Faso. Many Christians are being actively and violently persecuted, forced to flee for their lives, or killed.

Yet even in the face of danger, they will not abandon their faith. They continue to place their hope and trust in the Lord Jesus. Today, we join them in trusting God for their protection and for powerful change in this nation.

More than 4000 people have been killed in the violence since 2015, according to the AFP.

Funding from several Gulf States is one of the reasons extremism is growing in Burkina Faso, according to a representative of Aid to the Church in Need (ACN), a Catholic charity.

The government of France, the former colonial ruler of the country, has deployed 4,500 troops in Maili, Burkina Faso, Niger, and Chad. Their mission codenamed Barkhane is intended to help local forces deal with Islamic jihadists.