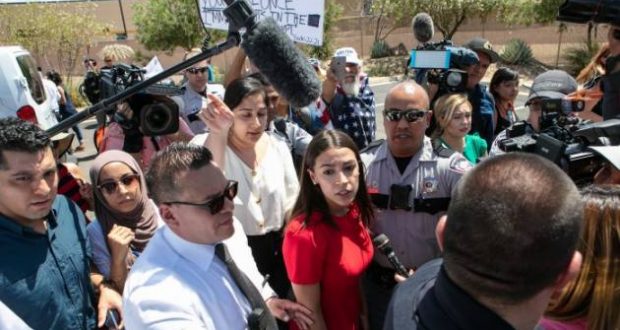 Rep. Alexandria Ocasio-Cortez (D-N.Y.), surrounded by reporters, has been called out by ICE officials for misleading the public about conditions in holding facilities.

Current and past immigration officials have refuted as untruths the accusations made by Rep. Alexandria Ocasio-Cortez (D-N.Y.), where she claims illegal immigrants are subjected to “inhumane” treatment and are told to drink out of the toilet bowls.

Following a high-profile visit at several border facilities in Texas on July 1, Ocasio-Cortez has made a number of accusations about the condition of the detention facilities and its detainees. The most disturbing of them all was a claim that the detainees were forced to drink out of a toilet bowl.

“They are not drinking out of the toilet—no Border Patrol agent is going to make anyone drink out of the toilet,” Homan said during his appearance on July 2. “It’s just ridiculous on its face.”

He explained that the holding cells at the facilities have an apparatus that is comprised of a sink and toilet that uses two separate water lines.

“They are designed that way to try to save space and make it more comfortable for the people who are in those facilities,” he added.

A photo of the said apparatus in another facility was posted on social media by Mail Online’s political editor David Martosko.

Ocasio-Cortez responded to Martosko’s post, confirming that it was indeed the same type of toilet sink but claimed that there was only one and it wasn’t functioning when she visited on July 1.

“This was in fact the type of toilet we saw in the cell. Except there was just one, and the sink portion was not functioning – @AyannaPressley smartly tried to open the faucet, and nothing came out. So the women were told they could drink out of the bowl,” she wrote.

Homan also said that the facilities “weren’t built for women and children” and border patrol has been “begging Congress for months to please fund HHS for more beds so these families could be moved into a proper facility with proper care.” A $4.6 billion emergency border funding bill was passed on June 27 aimed to address the humanitarian crisis at the U.S.–Mexico border caused by an influx of illegal immigrants in recent months. 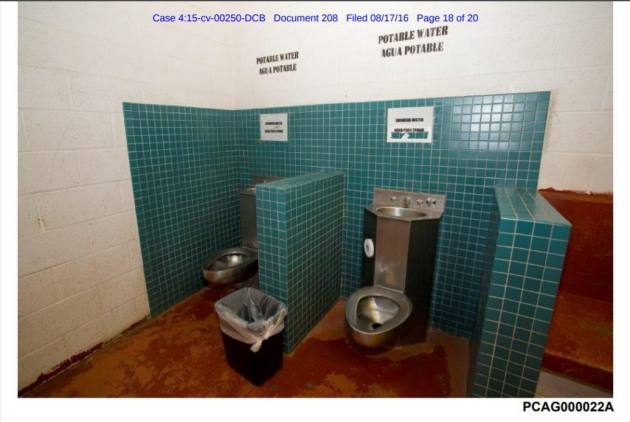 A toilet/sink combination typically used in holding facilities across the nation.

“That’s not how these facilities are designed. That’s not what our people are trained to do. Those facilities are very well scripted in the sense of people get regulated coming in, coming out. How often they get fed. The temperature inside the cell. The cleaning, all of that stuff is regulated very highly by the men and women of CBP,” Vitiello told the program’s host.

He added that the influx of illegal immigrants has overwhelmed the facilities and resources, which weren’t designed to hold and process the unprecedented number of people who are crossing into the United States illegally.

“This is a problem. These facilities were built for the booking procedure. People are supposed to be in those facilities for a couple of hours so agents can get their fingerprints, identify who they are, place them under DACA (sic) control, and in the case of families, eventually released,” Vitiello said.

“But they’re being overwhelmed. There are tens of thousands of people coming to the border all week long and there’s only so much floor space. There’s only so much computer time that agents have to get people through the process,” he added.

In a separate statement, a Department of Homeland Security official also highlighted the problem of the backlog caused by the surge of people arriving.

“HHS is backed up with children, so there is a real backlog at the CBP facilities there,” the official told Fox News.  “It’s a real problem. The supplemental funding will help, but it’s a band-aid on a much bigger problem.”

Brandon Judd, president of the National Border Patrol Council, also pushed back on Ocasio-Cortez’s claim, while calling on the agency to release video footage that would disprove her claims. The council represents border patrol agents in the United States.

“I’m calling on CBP to release that footage so they clearly show that she was treated with the utmost dignity and respect,” Judd told Breitbart News Tonight.

In a series of posts, Ocasio-Cortez made various claims about what she had seen and heard from people inside the facility.

“Officers were keeping women in cells w/ no water & had told them to drink out of the toilets,” she wrote. “This was them on their GOOD behavior in front of members of Congress.”

Along with the drinking water claim, Ocasio-Cortez claimed a detainee told them that border patrol agents were engaging in “psychological warfare” with them.

“[O]ne of them described their treatment at the hands of officers as “psychological warfare”—waking them at odd hours for no reason, calling them [expletive], etc,” the congresswoman wrote. “Tell me what about that is due to a ‘lack of funding?’”

Ocasio-Cortez was part of a group of Democratic lawmakers who were visiting several Customs and Border Patrol CBP stations at the southern border in the wake of reports that at least 250 children were detained in dirty and overcrowded conditions with inadequate food and lack of medical care at the Clint border facility, reported The Hill. Most of the children have since been relocated to children’s shelters.

The congresswoman was also accused of unruly behavior during the visit at the El Paso facilities on July 1. Two witnesses told Washington Examiner’s Anna Giaritelli that Ocasio-Cortez had allegedly yelled at border agents “in a threatening manner.”

“She comes out screaming at our agents, right at the beginning [of the tour] … Crying and screaming and yelling,” said one witness said, reported the news outlet.

“The agents, they wanted to respond, but they held back because she’s a congressional delegate. But when you have someone yelling at you in a threatening manner … They were like, ‘Hey, you need to kinda step back,’” the same witness said.

Ocasio-Cortez seemingly responded to the Washington Examiner report in a Twitter post on July 2. She said: “And to these CBP officers saying they felt “threatened” by me—They were literally discussing making a GoFundMe for an officer who attacked my [sic] on my tour. They confiscated my phone, and they were all armed. I’m 5’4”. They’re just upset I exposed their inhumane behavior.”

U.S. Customs and Border Protection has repeatedly warned that the influx of family units from Central America in recent months has overwhelmed Border Patrol facilities and resources and created a humanitarian crisis. In May, Border Patrol agents detained more than 144,000 people crossing from Mexico—the highest level in more than a decade. Moreover, during the first seven months of the 2019 fiscal year, more than 500,000 illegal immigrants crossed the border into the United States, according to CBP data.