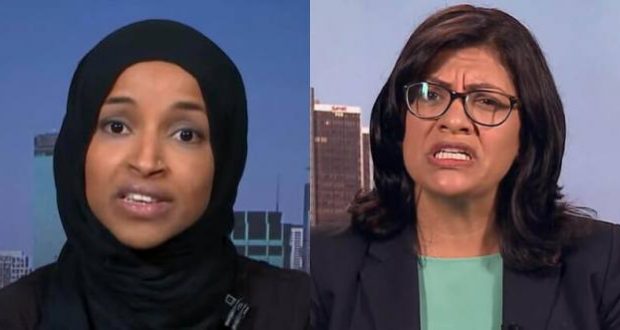 Democrats are considering punishing Israel for its right to deny two anti-Semitic Congresswomen from entering the nation after it was revealed their trip was sponsored by a group sympathetic to terrorism. Rep. Ilhan Omar (MN) is saying Congress should cut aid to Israel after she and her colleague Rep. Rashida Tlaib (MI) were barred from promoting the anti-Israel BDS movement on their planned visit to the country.

Israel had granted Tlaib entry for personal reasons to visit her grandmother but the congresswoman turned it down for political reasons.

Now, their pro-BDS intentions for their trip have been made clear with statements this week.

“We in the United States have a constructive role to play,” Omar said on Monday during a news conference with Tlaib in Minnesota. “We give Israel more than $3 billion in aid every year. This is predicated on them being an important ally in the region and the only democracy in the Middle East. But, denying a visit to duly elected members of Congress is not consistent with being an ally.”

“We must be asking, as Israel’s ally, that Netanyahu stop the expansion of settlements on Palestinian land and ensure full rights for Palestinians if we are to give them aid,” Omar, who sits on the House Foreign Affairs Committee, added.

She also urged her fellow legislators to visit Israel in her and Tlaib’s place but failed to mention that the largest group of Congressional members just returned from a 10-day tour. More than 70 freshman congressmen and women visited Israel this month to speak to Israeli and Palestinian leaders and reaffirm America’s friendship with the Jewish state. The two congresswomen refused to join their colleagues and instead opted to go on an independent trip sponsored by a radical organization with a history of promoting Nazi screeds and justifying Palestinian terrorism against innocent Israeli civilians.

“I would encourage my colleagues to visit. Meet with the people we were going to meet with, see the things we were going to see, hear the stories we were going to hear. We cannot, we cannot let Trump and Netanyahu succeed in hiding the cruel reality of the occupation from us. So I call on all of you to go,” she said.

Observers commented on social media saying they missed their opportunity with the official trip.

Israeli Prime Minister Benjamin Netanyahu said last week that “the itinerary of the two Congresswomen reveals that the sole purpose of their visit is to harm Israel and increase incitement against it.”

However, Israel later decided to offer Tlaib a visa to visit her Palestinian family in the West Bank.

Tlaib explained during Monday’s press conference that she “would not” visit her family because she could not agree to the restrictions Israel would place on her visit and travel.

“When you are a United States citizen, your president, your ambassadors, your state department on your behalf,” Omar said. “They defend you and fight for your right to freedom of speech to freedom of movement. To have an administration and a president and an ambassador that is not doing that puts fear in many people’s hearts.”

McClatchy News reported last week that House Democrats are considering retaliating against Israel’s ambassador to the US, Ron Dermer, and the US ambassador to Israel, David Friedman who is Jewish, for their roles in Israel’s decision to bar Omar and Tlaib.

It would be unprecedented for Congress to intervene in the State Department policy by punitively punishing Ambassadors.

The report said about a dozen lawmakers began discussions Friday over ways to communicate a “deep lack of confidence and trust” in Dermer and Friedman. The group is reportedly considering issuing a statement of no confidence in Dermer and opening an investigation into Friedman’s actions.

Earlier Monday, the White House fired back at Democrats considering unconstitutional retaliation against Dermer and Friedman.

“Congresswomen Rashida Tlaib and Ilhan Omar have a well-documented history of anti-Semitic comments, anti-Semitic social media posts and anti-Semitic relationships,” said White House spokesman Hogan Gidley. “Israel has the right to prevent people who want to destroy it from entering the country – and Democrats’ pointless congressional inquiries here in America cannot change the laws Israel has passed to protect itself.”

Previous: The Aging Brain: How lower connectivity plays a role
Next: Shelter pup lands starring role in Lady and the Tramp remake