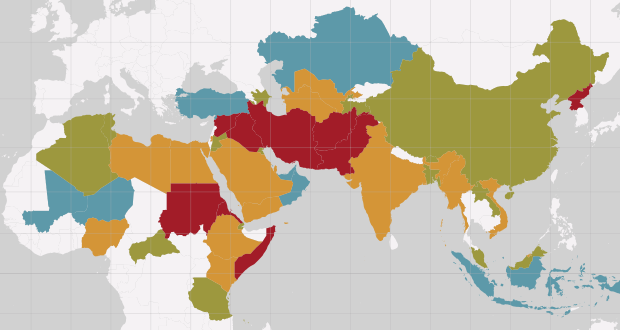 A world map of persecution of Christians shows the greatest threat in North Africa and Asia.

According to the 2015 Open Doors World Watch List, the Middle East Remains Most Violent While Africa Sees Largest Increase in Persecution of Christians

While the year 2014 will go down in history for having the highest level of global persecution of Christians in the modern era, current conditions suggest the worst is yet to come.

Check out the video of the National Day of Prayer for the Persecuted, below

Today, Open Doors released its annual World Watch List, which ranks the top 50 countries where it is most dangerous and difficult to be a Christian. This year, the threshold was higher for a country to make the list, indicating that worldwide levels of persecution have increased. Topping the 2015 list for the 13th consecutive year is North Korea. Africa saw the most rapid growth of persecution, while the Middle East saw targeted attacks, resulting in a mass exodus of Christians.

Approximately 100 million Christians are persecuted worldwide, making them one of the most persecuted religious groups in the world. Islamic extremism is the main source of persecution in 40 of the 50 countries on the 2015 World Watch List. While persecution can take many forms, Christians throughout the world risk imprisonment, torture, rape and even death as result of their faith.

“Even Christian-majority states are experiencing unprecedented levels of exclusion, discrimination and violence,” said David Curry, president and CEO of Open Doors USA. “The 2015 World Watch List reveals that a staggering number of Christians are becoming victims of intolerance and violence because of their faith. They are being forced to be more secretive about their faith.”

Middle East
The Middle East remains one of the most violent areas of the world for Christians. Violence against Christians by the Islamic State and other Islamic terrorist groups increased in countries like Iraq (3) and Syria (4). More than 70 percent of Christians have fled Iraq since 2003, and more than 700,000 Christians have left Syria since the civil war began in 2011. Afghanistan (5) and Pakistan (8) have both increased in persecution.

Africa
For the third year in a row, the majority of African nations on the World Watch List have increased in rank due to Islamic extremism. Kenya made the largest jump, moving up from number 43 to number 19. With no functioning government, Christian persecution remains severe in Somalia, which retained the No. 2 spot on the list. Both Sudan (6) and Eritrea (9) reentered the top 10 and Nigeria (10) appeared in the top 10 for the first time.

Asia
North Korea remains the most dangerous and difficult place to be a Christian. An estimated 70,000 Christians remain in prison for their faith. The conditions are also worsening for Christians throughout Asia. Countries such as Uzbekistan (15), Vietnam (16) and India (21) have all seen increases in persecution. Of particular note is India (21), where persecution is driven by Islamic extremism and Hindu fundamentalism.

Persecution at a Glance
Christian persecution is defined as any hostility experienced as a result of one’s identification with Christ. Recent examples include imprisonment, torture, beheadings, rape, and loss of home and assets.

“The goal of the World Watch List is to keep Christian persecution on the radar of those enjoying the privileges of freedom,” said Curry.  “The perpetrators of persecution need to know that the world is watching and stands in opposition to persecution. And for the persecuted, we want them to know that they are not forgotten.”

Methodology
The Open Doors World Watch List is the only annual survey of religious liberty conditions for Christians around the world. From Nov. 1, 2013, to Oct. 31, 2014, researchers measured the degree of freedom a Christian has to live out his or her faith in five spheres of life—private, family, community, national and church life, plus a sixth category measuring the degree of violence. For more information on the methodology of the World Watch List, please visit OpenDoorsUSA.org.

About Open Doors USA
For 60 years, Open Doors USA has worked in the world’s most oppressive and restrictive countries for Christians. Open Doors works to equip and encourage Christians living in dangerous circumstances with the threat of persecution and equips the Western church to advocate for the persecuted. Christians are the most persecuted religious group in the world and are oppressed in at least 60 countries. For more information, visit OpenDoorsUSA.org

Previous: Is there a Christian perspective to gun control?
Next: World’s most dangerous cities include St. Louis