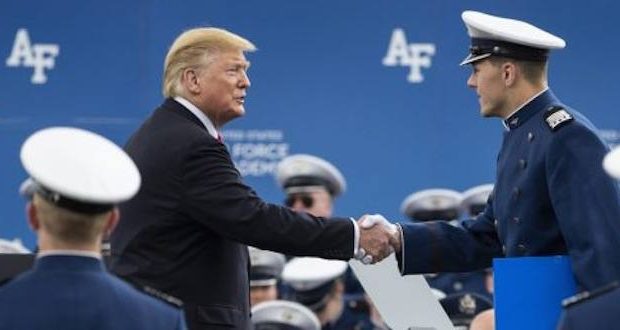 President trump was greeted by thunderous applause from cadets when he announced he would personally greet all 1,000 Air Force Academy graduates this week. He saluted, shook hands with, and spoke to each graduating member of the Air Force Academy in Colorado on Thursday, May 30.

It is thought to be the first time in history that a president has been so personally involved with academy graduates.

The president traveled to the academy to give a commencement speech and stuck around to salute the graduates one-by-one as they were announced.

That part of the graduation took over an hour. There were 1,000 cadets graduating on Thursday

Trump said he was told he didn’t have to stay for the rest of the ceremony.

“They gave me a choice. They said, ‘Sir, you don’t have to shake any hands, some people do that.’ Some people do that. Those are the smart ones. They’re out of here.” Trump told the audience, prompting laughter.

During the speech, the president praised the cadets for choosing the Air Force.

“To the nearly 1,000 cadets who will soon become Second Lieutenants in the U.S. Air Force: You could have chosen any school, any career you wanted, but you chose a harder path and a higher calling: to protect and defend the United States of America. I know what you’ve been through, and it’s tougher. But you know what? In the end, it’s better. You’re going [to] see. You’ll see,” he said.

“When you choose the Air Force, you choose the noble road of service and duty and devotion. You choose to break old boundaries, and unlock new frontiers, and live life on the cutting edge.”

Trump said that only 10 percent of the applicants to the academy are accepted and that many people who think about applying choose not to because of how hard it is to get in. Even for those who are accepted, one out of five do not graduate.

“Only the best survive to the very end. And here, under the majestic peaks of the Rockies, you have risen to every challenge, overcome every single obstacle, and proven yourselves worthy of the bars that will soon adorn your uniform,” Trump said.

“You survived BCT, made it to Recognition, and earned your Prop and Wings. You soared in gliders, piloted aircraft, and launched satellites that are now orbiting way, way above us, looking down on us. You performed advanced research, developed new techniques. You honed your skills as cyber operators, and jumped out of planes thousands of feet above the Earth. Not easy. For America’s airmen, the sky is never, ever the limit.”

A recent poll shows President Trump has the highest approval rating among the nation’s military in over a generation.