As levees breach in Northeastern Missouri, officials now say 300 road and highway closures are in effect across the state.

The Missouri Department of Transportation says that the closures include a 67-mile stretch of Interstate 29, from just north of St. Joseph to the Iowa border. 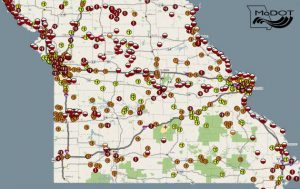 Other major highways closed because of flooding include U.S. 36 west of Bevier at the Chariton River and U.S. 54 at Louisiana, Missouri plus streets near the Missouri Capitol in Jefferson City also are closed.

The recent torrential rain has affected all areas of the state and caused flooding to be state-wide. Northern Missouri, which has seen some of the heaviest rain and is framed on the west, east and south by the nation’s two mightiest rivers,  has the greatest number of road closures.

The transportation department says Amtrak passenger train service between St. Louis and Kansas City also has been suspended. The trains use tracks that run near the Missouri River.

St. Louis has closed its floodgates in advance of the river cresting there Monday. The high water also has closed regional locks and dams to navigation.

The problems weren’t isolated to communities along the Mississippi River. The National Weather Service issued flash flood watches for much of eastern Kansas and western Missouri.

There have not been this many road closures in Missouri since the great flood in 1993.

More rain is expected to spread across the state over the weekend. Drivers are urged to check road conditions.

Previous: President salutes, shakes hand of every Air Force graduate this week
Next: Tebow has advice for millennials on staying grounded