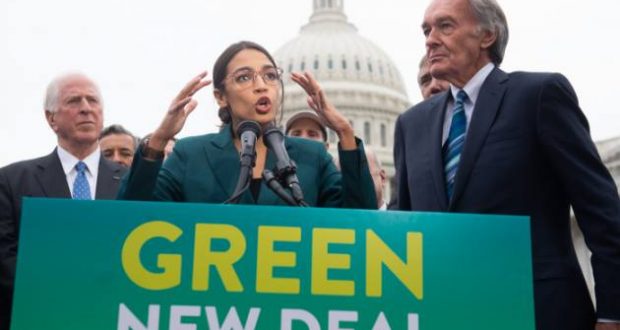 US Representative Alexandria Ocasio-Cortez, Democrat of New York, and US Senator Ed Markey (R), Democrat of Massachusetts, speak during a press conference to announce Green New Deal legislation to promote clean energy programs outside the US Capitol in Washington on Feb. 7, 2019.

The remarks regarding eliminating “farting cows and airplanes” first surfaced in materials released by Ocasio-Cortez’s office during the rollout of the Green New Deal resolution. Ocasio-Cortez has since scrapped the language from the documents, but it continues to provide fodder for ridiculing the resolution.

Instead of backtracking on the idea of eliminating cows because of their flatulence, Ocasio-Cortez said the Green New Deal would look to change the animals’ diets in order to reduce their emissions. She repeated the assertions during an MSNBC town hall aired March 29.

“We need to innovate and change our, our grain, uh, our, our cow grain, from which you know they feed in these troughs,” Ocasio-Cortez told the host. “We need to look at regenerative agriculture. These are our solutions.”

The Green New Deal resolution is a vision for a socialist-communist style restructuring of the United States economy, which would hand the government near total control over the energy industry while offering vague promises of universal access to “healthy food,” “nature,” and “housing.”

Ocasio-Cortez showed little concern for the astronomical price tag of the Green New Deal. According to one estimate, U.S. taxpayers would pay $650,000 per household for the cost of the Soviet-style 10-year mobilization called for in the resolution.

“They wave this wand and they say, ‘Oh, it’s going to cost a bazillion dollars,’ like they sound like Dr. Evil,” Ocasio-Cortez said. “You know, let’s just start. Now!”

Ocasio-Cortez also doubled down on her misreading of the report by the Intergovernmental Panel on Climate Change (IPCC), falsely stating that it said there is only 12 years left to avoid a catastrophe.

The report doesn’t say that the world will end in 12 years if climate change isn’t addressed. It instead says that in order to limit global warming to less than 1.5 degrees Celsius, the world would need to reduce emissions by 50 percent by 2030.

“We have an expiration date and the IPCC report says we’ve got 12 years to turn it around!” Ocasio-Cortez said. “Twelve years! My concern is we are going to be the frog in the pot of boiling water … and our kids are doomed,” Ocasio-Cortez, who isn’t married and doesn’t have children, added.

The latest IPCC report ignored decades of scientific best practices and used an average of 29 major climate models to come up with its forecast, according to Patrick Michaels, former director of the Center for the Study of Science at the Cato Institute.

“Weather forecasters know that some models work better than others in specific situations, and they tend to rely on the versions that work best,” Michaels wrote.

“But the United Nations’ Intergovernmental Panel on Climate Change simply averages up the 29 major climate models to come up with the forecast for warming in the 21st century, a practice rarely done in operational weather forecasting.”

During the same town hall, Ocasio-Cortez falsely claimed that Congress amended the U.S. Constitution “to make sure Roosevelt did not get re-elected.” Congress passed the 22nd Amendment in 1947, two years after President Franklin D. Roosevelt died in office.

Previous: Words of a Marxist and murderer welcome 2020 Democrat candidates
Next: Have millions of Christians been misled about the second coming of Jesus?