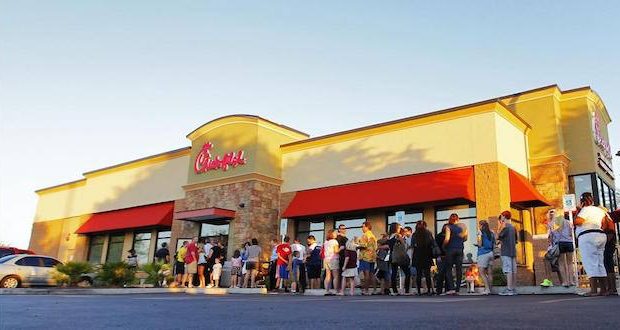 Some of the biggest battles on college campuses this fall are playing out not on the football field but in the cafeteria.

Close to home, where University of Kansas students are known as Jayhawks, chickens have been making news. Chick-fil-A has come under fire because president and CEO Dan Cathy publicly supported traditional marriage in 2012. Opponents have accused Chick-fil-A of being anti-LGBTQ for its charitable giving to the Fellowship of Christian Athletes, Family Research Council and Salvation Army.

“The culture of Chick-fil-A fosters hate and discrimination on multiple levels,” the Sexuality & Gender Diversity Faculty and Staff Council wrote in a letter to university leaders. “The arrival of Chick-fil-A in this building is insulting, counterproductive and unacceptable.”

The College Republicans group on campus responded by starting a petition in support of the restaurant.

The administration of Purdue University in West Lafayette, Ind., recently struck a blow for fast-food freedom despite protests by faculty and students, Faith Wire reported. The university cited “overwhelming demand for (Chick-fil-A’s) service from students, staff and faculty” as their main reason for bringing the chain to campus. The statement also noted that the person managing the franchise is a “young female franchisee, a Purdue graduate” and “has signed and observed a commitment of equal access and treatment in her employment and service practices.”

The university’s statement came after the school’s Senate’s Equity and Diversity Committee proposed a measure that would not allow Chick-fil-A on campus. The committee claimed that the franchise does not “uphold the same values and promote inclusivity with their policies, hiring practices and actions.”

Student Riley Johnson summed up the feeling of many students: “This is an incredible company with strong values, great services and delicious food. The restaurant’s stances do not cross my mind when I go there or affect my eating habits. I personally believe a private company should have the freedom to take a political stance if they choose. If people don’t agree with it, then they don’t have to eat there. That is their choice.”

Other campuses across the nation are also dealing with protesters disrupting planned restaurants.