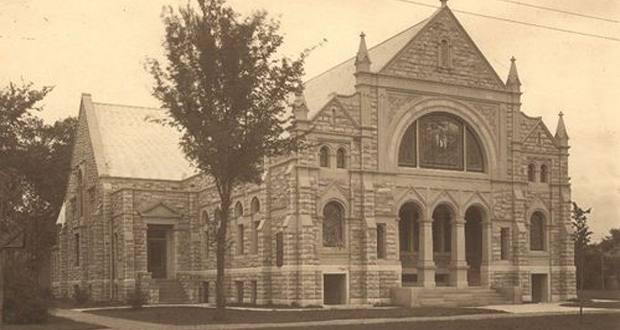 A ribbon cutting is scheduled for 1 p.m. Sept. 26 to formally unveil the renovated Charles Sheldon Study at Old Prairie Town. Speakers at the ribbon cutting include County Commissioner Bill Riphahn, Rev. Tobias Schlingensiepen of First Congregational Church, Rev. Gage Church of the Central Congregational Church, Curt Loupe, president of Friends of Ward-Meade (part of the Parks For All Foundation), Jodi Peterson of Friends of Ward-Meade, and Susan Fowler-Hentzler and John Bell of Shawnee County Parks + Recreation.

The study will be open to the public during the 40th Anniversary of Apple Festival Oct. 5-6 at Old Prairie Town.

For years, the study sat in the corner of the southwest entrance to Old Prairie Town as the lone remnant of the home of the Rev. Dr. Charles Sheldon whose book “In His Steps” popularized the phrase, “What Would Jesus Do?”. More than 50 million copies of the book have been sold worldwide and it has been translated into multiple different languages. Rev. Sheldon built the study in the garden of his Topeka home as a refuge from visitors, including journalists, who streamed to his home following the popularity of the book.

In 2017, a National Park and Recreation Association Fund Your Park campaign was approved to renovate the study into a museum. The “Sheldon’s Legacy Lives” campaign raised money for the renovation which keeps alive the legacy of the Congregationalist minister whose work carried a message of social justice. The restoration of the study is especially important since the Central Congregational Church, which Sheldon once led and whose museum housed his work and artifacts, has been sold and the museum’s contents had to find a new home. Some were donated to the Topeka Shawnee County Public Library, some were given to the Kansas Historical Society and some were presented to Old Prairie Town.

It was at his home in the College Hill neighborhood of Topeka that Sheldon wrote a series of sermons that became the book “In His Steps.” The study, initially located in the garden of the Sheldon home, was eventually relocated to Gage Park and then, in 1991, to its present location at Old Prairie Town. Renovation of the study included replacing the roof and exterior walls, to installing HVAC needed to preserve artifacts, installing new sheetrock, repairing the windows and chimney, making the building ADA accessible and then adding display cases and interpretive signage.

“To preserve the work of a Topeka minister whose work became a worldwide movement is a privilege and one that we treasure,” said Curt Loupe, president of Friends of Ward-Meade. “It is fitting that the renovation of the Charles Sheldon Study is complete in time for the 40th Anniversary of the Apple Festival at Old Prairie Town so the thousands of guests who come to the festival can learn about this special piece of local history.”

For one week, by invitation, Sheldon edited the Topeka Daily Capital as Jesus would do. Daily circulation grew from 30,000 to 350,000. In 1893, Sheldon established a Kindergarten serving African American students so that they could receive an education. It is recognized as the first African American Kindergarten west of the Mississippi. He worked to develop programs for citizens of color and of low means to raise their station in life. His social gospel encouraged the wealthy to involve themselves with the social inequities of the time: labor conditions, fair wages, and women’s rights, children in the workplace, health and education. He was also a proponent of small business and entrepreneurship.

Go here to visit the Topeka Metro Voice Facebook page for local event notices, breaking news and local announcements. To help us spread the word, and to continue seeing our posts on your Facebook feed, “Like” the page and then like or share a story now and then.

Previous: Several key religious cases are on Supreme Court docket
Next: LIFE LESSONS FROM A LITTLE ONE – The Good Guy Always Wins