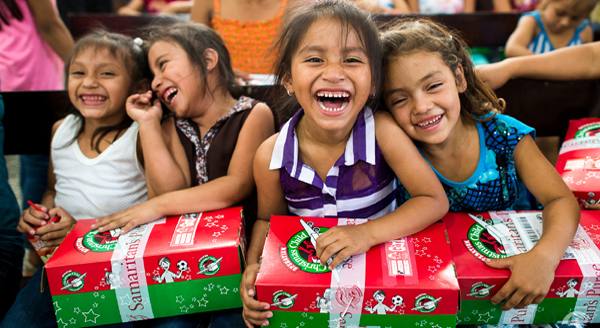 Kids in a third-world country excitedly get their Christmas boxes.

It’s always a sign that the Christmas season is approaching when atheists attack Samaritan’s Purse. The Freedom From Religion Foundation has stopped a school from participating in Operation Christmas Child.

A “concerned district community member” reached out to complain that North Short Elementary School, a public school in the Galena Park, Texas Independent School District, recently took part in the fundraiser. The foundation responded by sending a letter to the district cautioning against future participation in the initiative — a warning that reportedly was quite effective.

READ: Still time to get your shoeboxes filled and turned in

“FFRF’s letter worked well as a constitutional alert,” the district said in a statement. “The state/church watchdog has been assured, in a communication from the school system, that the district had been unaware of the school’s participation in the evangelical fundraising and that this will no longer take place.”

Annie Laurie Gaylor, co-president of the foundation, applauded the district for purportedly halting participation in Operation Christmas Child. “Our tipoff had the desired effect,” she said. “We applaud the school district for being so responsive.”

The foundation said the district should work with charities that aren’t sectarian in nature and that are secular. The atheist activists also took aim at the Rev. Franklin Graham, president of Samaritan’s Purse, noting their disagreement with Graham on LGBTQ issues and the COVID-19 vaccine.

Operation Christmas Child’s mission is to “demonstrate God’s love in a tangible way to children in need around the world.” Each year, children, adults and families all over the United States come together to pack boxes that are delivered to young people in America and around the globe. Since 1993, more than 188 million kids in more than 170 nations have been reached with a shoebox filled with gifts and the gospel message.