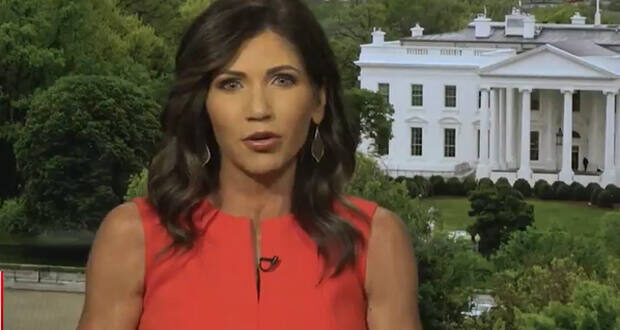 “What President Biden is doing by these mandates coming down to businesses and employers that employ more than 100 people is unconstitutional,” she stated in a television interview. “The Constitution clearly states that there are limited powers for the federal government and that all other powers are delegated to the states. I will, as soon as that guidance comes out, be filing litigation, and I have told the president that I would see him in court.”

She also is critical of Dr. Anthony Fauci.

“Fauci has done a grave disservice to this country,” Noem said. “What he has done is discredited our health officials. He’s been political. He’s not been consistent. He has not followed the science. Therefore, his credibility is down to zero.”

She praised the new pro-life heartbeat law in Texas. “We reached out immediately to those who drafted and worked on the Texas law and are consulting with them on how that bill would fit in our statute as well,” she said. “I think it was a fantastic win for us.”

Noem went on to call the Biden administration ungodly.

“What they are doing and the actions they’re taking are not biblical,” she said. “I know they, they many times talk about being religious. But I think that it’s really time for all of us to look at the actions of our leaders and see if they line up with the word of God.

“We’ve seen our society, our culture, degrade as we’ve removed God out of our lives, and people become what they spend their time doing. I really believe that focusing on those foundational biblical principles that teach us that every life has value every person has a purpose, will recenter our kids and help us really heal this division that we see taking over our country.”

Previous: “People need to be outraged”: trafficking now rising across United States
Next: ‘Auschwitz Untold in Color’ will be shown in conjunction with Union Station exhibition