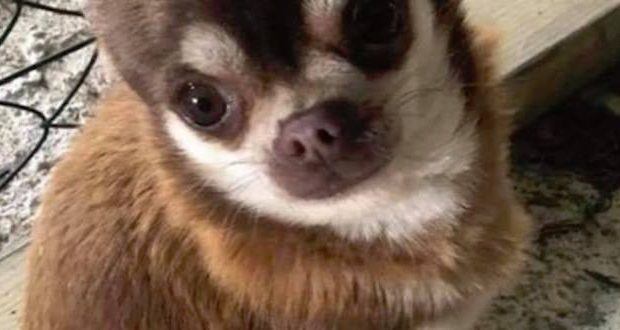 A British seaside town is desperately looking for a tiny Chihuahua dog that was last seen being carried off in a seagull’s beak.

Four-year-old Gizmo’s owners took to social media, hoping he might have survived the ordeal after he was whisked away in front of their eyes in their backyard in Paignton in the south of England on July 21.

By the next morning, Gizmo’s plight was featured in the national broadsheets.

His owner Becca Hill told Devon Live that she had heard of it happening to other chihuahuas—the tiniest pure breed of dogs in the world—but never expected it to happen to her.

READ: Dogs have personalities that change with age

Hill says the dog was in the garden as the washing was being put up when the gull suddenly swooped down. “It carried Gizmo a fair way as we couldn’t see him anymore. I have no idea if he was dropped or where he is now,” Hill told Devon Live. 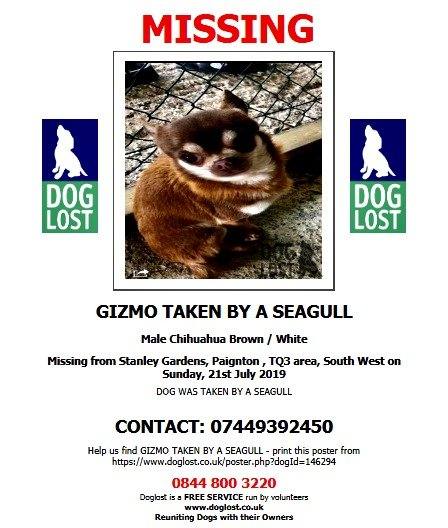 The information on the missing dog, along with photographs, was shared on local groups for locating missing dogs.

Becca, who owns three chihuahuas in total, also posted about Gizmo on Facebook. “Please, please, please, anyone finds a chihuahua he’s mine, a seagull took him from my garden,” she wrote, according to ITV News.

As a rule of thumb, birds can generally lift around half of their weight—although it can be considerably greater in the case of some raptors such as fish eagles.

Seagulls are known to be able to lift clams weighing up to around one kilogram (2.2 pounds) in weight. Chihuahuas are the smallest recognized pure breed of dog in the world, weighing typically between 1.8 and 2.7 kilograms (between 4 and 6 pounds).

Despite locals scouring the area, checking gardens, clearing rooftops, garage roofs, and trees, there was still no sign of Gizmo by the end of the day.

The search continued on Monday morning.

Seagull expert Peter Rock, an ornithologist at the University of Bristol, said he warns owners of tiny dogs to not let them run around in the garden unattended.

He told BBC Radio 4 Today: “These gulls are very large and as you know, if you’ve been around gulls, you’ll know they’re very large and are quite capable of picking up small animals, quite commonly they will kill pigeons that look a little bit under the weather.”

“It brings me back to that story a long time ago about poor little Roo in Cornwall who got attacked by herring gulls.”

Rock said he has seen gulls rip the innards out of ducks, and that small dogs could be at risk.

“If you have a very tiny little dog I suggest you don’t let it run around on your garden as it might well become a meal. It would have to be very tiny like this one was,” he said.

Gizmo’s owners will take little comfort in the fact that in 2015 in the same county, Devon, another chihuahua was pecked to death by gulls.

The dog, Bella, had managed to nudge open the back door while her owner took a shower. Her owner found the birds pecking Bella to death.