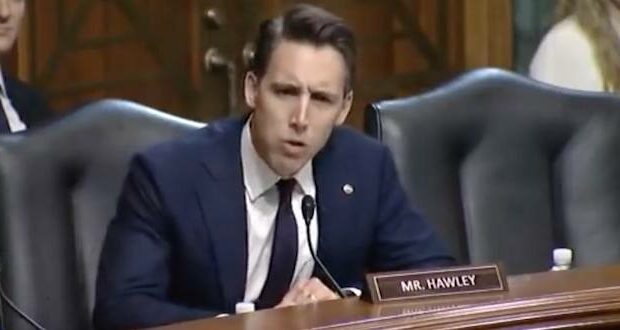 President Joe Biden nominated Holly Thomas for the U.S. Court of Appeals for the Ninth Circuit. Hawley asked about her past actions in which she signed briefs that alleged that concerns about having biological males in girls’ bathrooms were unfounded. Thomas repeatedly dodged when Hawley asked if she stood by her comments in two separate briefs when she served as an advocacy lawyer.

The importance of the exchange comes during the controversy involving the Louden County, Virginia school board. The board, in an effort to prevent negative press surrounding their transgender restroom policy in schools, purposely did not report the rape of a young girl in a school restroom by a boy allowed to use the girls restroom because he claimed he was transgender.

The father of the girl attempted to address the unpublicized incident to school board members. The board claimed he was disorderly and ordered him  arrested by the police. He was forcibly removed from the school board meeting.

It has also been admitted by the school board that they quietly transferred the boy to another school district where he again is alleged to have raped another girl.

The incident led the Biden Justice Department to label concerned parents at school board meetings possible “terrorists.” The involvement of the FBI has further angered parents across the country concerned by the actions of their local school boards covering issues like mask mandates, restroom policies and critical race theory.

With these important issues making their way through courts, it has become part of the line of questioning of Biden judicial and other nominations, including questions from Hawley and others.

“Do you stand by your comments in these briefs that there is no evidence of violence or crime in restrooms by allowing biological males to use biological females’ restrooms?” he asked Thomas.

Thomas answered, “In every case that I had as an advocate, it was my duty to represent the views of my clients.”

Hawley persisted, “Do you agree, still today, that there is no data, evidence in support of the claim that allowing people to use bathrooms corresponding with their gender identity will lead to increased violence or crime in restrooms. Do you think that’s accurate? You signed those statements. You filed that brief. Do you think that that’s right?”

“At the time that I filed the briefs I was representing clients zealously as I was ethically bound to do,” Thomas responded.

Still, later, Hawley gave Thomas one last opportunity: “I just want to be clear; you stand by these comments. You stand by what you filed in these multiple different cases. You don’t think you were wrong about that? You haven’t changed your view? You wouldn’t change anything that you said that you filed, that you put your name to?”