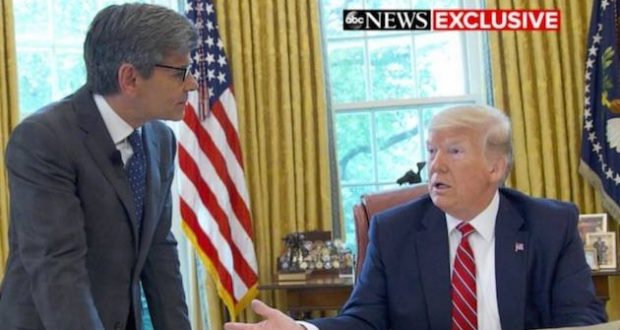 Stephanopoulos and Trump in the Oval Office. The ABC political anchor previously worked for the Clinton White House and admitted to breaking campaign finance laws.

Stephanopoulos called-out for bias by President Trump in interview

Both are known for biased reporting against Trump.

“You are one that said ‘Donald Trump is not going to win’ and then you smiled when I got into the race, and you laughed,” Trump told Stephanopoulos in an interview that aired on June 16.

“You and Maggie Haberman would laugh, ‘Haha,’ that was so funny, and I will give your deputy chairman of the DNC [Democratic National Committee] credit. Because he looked at the two of you and said, sorry to tell you but Donald Trump is going to win.”

Stephanopoulos didn’t deny laughing at the idea that Trump would win, responding, “And you are the president of the United States today.”

“And you laughed because you thought it was ridiculous and Maggie Haberman of the New York Times—who knows nothing about me, by the way, I rarely speak to her—she laughed and thought it was so funny. The people that didn’t think it was funny were the people that voted for me,” Trump said.

“And you are here right now. You are president of the United States,” Stephanopoulos said.

Stephanopoulos, who uttered several factual errors during the interview, is a former adviser to Democratic President Bill Clinton. The ABC anchor was caught donating $75,000 to the Clinton Foundation while employed by ABC, donations he failed to disclose to his employer and viewers.

After a probe by the conservative Washington Free Beacon, Stephanopoulos admitted he made the highly irregular donations.

“I thought that my contributions were a matter of public record. However, in hindsight, I should have taken the extra step of personally disclosing my donations to my employer and to the viewers on air during the recent news stories about the Foundation. I apologize,” Stephanopoulos told Politico in 2015. ABC did not punish the anchor in any way for the wrongdoing. 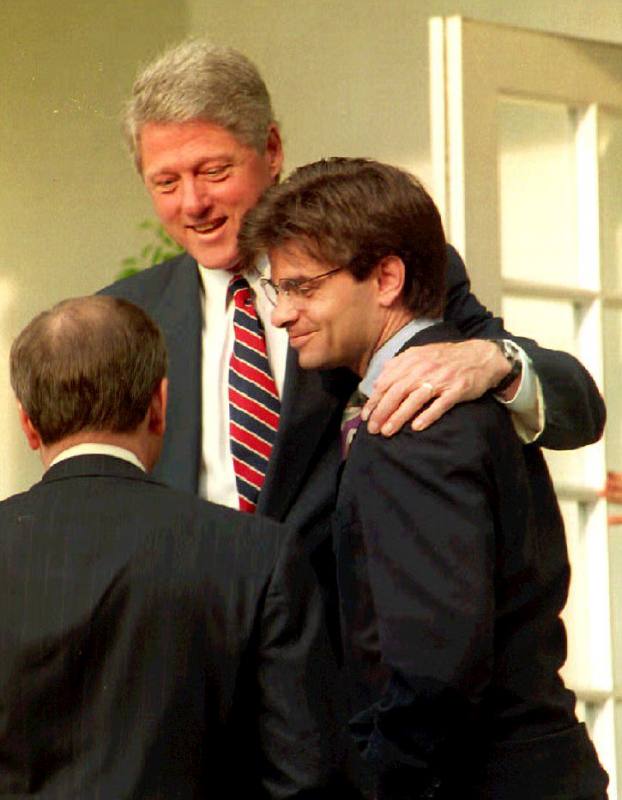 President Bill Clinton (C) speaks to White House Chief of Staff Thomas McLarty (L) with his arm around George Stephanopoulos (R) in the Rose Garden of the White House on May 29, 1993.

Stephanopoulos’s history with the Clintons, who are political rivals of Trump, was not disclosed to viewers of the latest interview with the president.
Trump noted the history during the interview. At one point, talking about alleged crimes committed by Hillary Clinton, Trump told the anchor: “It was committed by your friend, Hillary Clinton.”

Haberman, of The New York Times, regularly pens stories written from the perspective of the president that claim to know what he was thinking at a given moment. The stories often rely heavily on anonymous sources.

In a January 2015 email, Nick Merrill, the communications director for the Clinton campaign, wrote that the campaign has had a “very good relationship with Maggie Haberman of Politico over the last year.”
“We have had her tee up stories for us before and have never been disappointed,” Merrill continues. “While we should have a larger conversation in the near future about a broader strategy for reengaging the beat press that covers HRC, for this we think we can achieve our objective and do the most shaping by going to Maggie.”

The email goes on to explain which information would be shared “on background” and what would be shared “on the record” while outlining how the story will help the campaign shape its message. The campaign’s goal was to induce Haberman to write a story that demonstrated how thorough and transparent Clinton was in her decision-making process.

Haberman went on to publish two stories, on Feb. 20 and Feb. 27. Both articles are nuanced and include a dose of criticism, but ultimately achieved the campaign’s goals.

Haberman was also among 38 reporters and media personalities who accepted an invitation to a ritzy, completely off-the-record dinner hosted by the Clinton campaign on April 10, 2015, according to another email. The campaign’s goal for the dinner was to frame Clinton’s message and the race, according to the event memo.