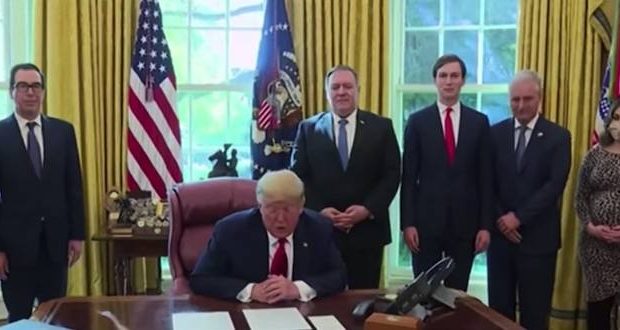 President Trump talks with Sudan's leader by phone as members of the administration look on.

President Donald Trump has announced another historic peace deal involving an Arab nation and Israel. The government of Sudan on Wednesday announced it signed the Trump-brokered “Abraham Accords” with the U.S. and Israel.

The two countries, Sudan and Israel, have agreed to have full diplomatic ties, making Sudan the third Arab state — after the United Arab Emirates and Bahrain — to move to normalize relations with Israel late last year. Morocco also established diplomatic ties with Israel.

The move came during Treasury Secretary Steven Mnuchin’s visit to Khartoum, making him the first senior American official to land there since President Donald Trump’s administration removed the African country from the list of state sponsors of terrorism.

Mnuchin arrived at Khartoum’s international airport, where he was received by acting Finance Minister Heba Mohammed Ali, and U.S. Charge d’Affaires in Sudan Brian Shukan, the prime minister’s office said in a statement.

It is the first visit by a sitting U.S. treasury chief to Sudan, the statement said. Secretary of State Mike Pompeo in August became the first top American diplomat to visit Sudan since 2005, when Condoleezza Rice visited. Pompeo was also the most senior U.S. official to visit the African country since last year’s ouster of al-Bashir.

Mnuchin’s visit came after a one-day-visit to Cairo, where he met with Egypt’s President Abdel-Fattah el-Sissi, a close U.S. ally. The stops are part of a flurry of activity during the final days of the Trump administration. Democrat Joe Biden becomes president on Jan. 20.

The U.S. treasury secretary met with Prime Minister Abdalla Hamdok, and is scheduled to meet with other Sudanese leaders including Gen. Abdel-Fattah Burhan, head of the ruling sovereign council.

The visit came “at a time when our bilateral relations are taking historical leaps towards a better future. We’re planning to make tangible strides today as our relations enter a #NewEra,” Hamdok tweeted.

Sudan is on a fragile path to democracy after a popular uprising led the military to overthrow al-Bashir in April 2019. The county is now ruled by a joint military and civilian government that seeks better ties with Washington and the West.

Previous: China prevents entry of WHO investigators looking into covid origins
Next: Scotland closes all churches in latest lockdowns