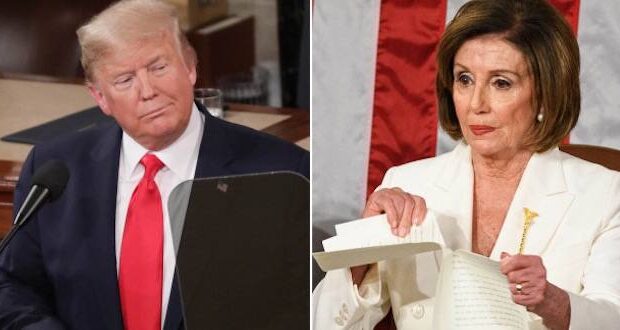 House Speaker Nancy Pelosi, rips what was to be an archived copy of the State of the Union speech given by President Donald Trump.

President Trump said on Friday he could sign executive orders within a week that would extend unemployment benefits that expired on July 31, and that he will also sign an executive order requiring health insurance companies to cover all preexisting conditions.

The president said his administration may also defer the payroll tax, perhaps back to June, as well as continuing a moratorium on evictions and deferring student loan payments through the end of the year.

“Eviction is a big problem” that is “very unfair to a lot of people,” Trump said at a news briefing on Aug. 5.

Trump administration officials stated that President Trump may need to take such executive action since talks between Democrats and Republicans have faltered.

Regarding the suspension of the payroll tax, Trump said that “many economists” on “our side” support the measure, although it doesn’t have much support from Republicans or Democrats in Congress.

Trump appeared to take issue with a provision in the House-passed HEROES Act that would grant $1 trillion in funds to state and municipal governments.

The president described it as a “$1 trillion bailout” for “poorly run states … and cities.” He said that “they’ve been poorly run for a number of years,” saying that it isn’t “COVID-related.”

Treasury Secretary Steven Mnuchin, White House chief of staff Mark Meadows, House Speaker Nancy Pelosi (D-Calif.), and Senate Minority Leader Chuck Schumer (D-N.Y.) have been meeting on a daily basis since last week. Pelosi and Schumer have said that the talks have been positive, although Meadows told reporters on Aug. 6 that a deal isn’t likely to be made in the near future.

But Senate Majority Leader Mitch McConnell (R-Ky.) said he believes there will be a deal “at some point in the near future,” but isn’t sure “exactly when.”

“The argument is over how much [aid] is appropriate at this particular juncture,” he said in an interview on Aug. 6, noting that he will have to rely on Senate Democrats and some Republican senators to advance any proposals because some GOP lawmakers are far from agreement on their party’s own $1 trillion coronavirus relief measure.