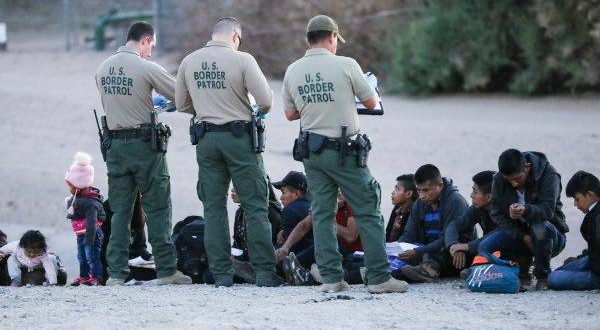 A group of illegal aliens is apprehended by Border Patrol after crossing from Mexico into Yuma, Ariz., on April 12, 2019. (Charlotte Cuthbertson/The Epoch Times)

The Supreme Court is allowing a new Trump administration rule on asylum seekers to be enforced nationwide by dropping all injunctions brought by Democrats across the country. The new asylum law may now be enforced while it is challenged in the courts, which could take years.

The ruling is seen as a huge setback for those proposing open borders and acceptance of illegal immigration.

The Supreme Court late Wednesday (pdf) ordered that all injunctions against the asylum rule be dropped nationwide. The move allows the Trump administration policy to take effect across the entire U.S.-Mexico border, while litigation against it continues.

The asylum rule effectively disqualifies most migrants who have been applying for asylum at the southern border, and is the latest effort by the Trump administration to curb illegal immigration.

President Donald Trump tweeted about the move late Wednesday, saying that it was a “BIG United States Supreme Court WIN for the Border on Asylum!”

Who were the dissenters on the court?

Among the nine judges on the court, liberal Justices Sonia Sotomayor and Ruth Bader Ginsburg dissented.

“Once again the Executive Branch has issued a rule that seeks to upend longstanding practices regarding refugees who seek shelter from persecution,” Sotomayor and Ginsburg wrote.

Eight days after the asylum rule went into effect in July, Obama-appointed U.S. District Judge Jon Tigar for the Northern District of California issued a nationwide injunction to block it. Tigar’s injunction took place after the American Civil Liberties Union (ACLU), the Southern Poverty Law Center, and Center for Constitutional Rights filed a federal lawsuit in his district court to challenge the new rule.

In August, a three-judge panel of the 9th Circuit Court of Appeals narrowed Tigar’s order so that it applied only in states within the jurisdiction of the 9th Circuit, namely the border states of California and Arizona. That enabled the Trump administration to enforce the asylum rule in the other border states—New Mexico and Texas.

But on Monday, Tigar re-issued a nationwide block to the asylum rule, which prompted condemnation from the White House.

“Immigration and border security policy cannot be run by any single district court judge who decides to issue a nationwide injunction,” White House press secretary Stephanie Grisham said in a statement. “This ruling is a gift to human smugglers and traffickers and undermines the rule of law. We previously asked the Supreme Court to set aside the district court’s injunction in its entirety, our request remains pending with the Court, and we look forward to it acting on our request.”

The 9th Circuit Court of Appeals then again narrowed Tigar’s order on Tuesday to only take effect within that circuit’s jurisdictions, which includes the border states of California and Arizona.

The latest action by the Supreme Court now enables the Trump administration to enforce the policy nationwide, while the district court case against it continues.

The rule operates under the premise that those seeking asylum from persecution or torture—based on their race, religion, nationality, membership in a particular social group, or political opinion—should do so in the first safe country they reach.

“It’s just common sense that if you really were in danger, you would go to the first safe country,” said Jessica Vaughan, director of policy studies at the Center for Immigration Studies, “[but] some of these people are traveling thousands of miles. And so it just stretches credulity. It’s not feasible they’re actually fleeing persecution.”

Under the old rules, almost 90 percent of those who claim credible fear when presenting themselves at the border pass the initial screening. However, less than 20 percent are granted asylum relief by an immigration judge. For Central Americans, that number is less than 10 percent.

Claims for asylum have skyrocketed in recent years as smuggling groups and economic migrants have taken advantage of legal loopholes and an overwhelmed system. Democrat leaders of Congress have been accused of encouraging the flood of illegal entrances into the country.

Only about 25 percent of current illegal border crossers are claiming credible fear of return to their home country, Kevin McAleenan, acting secretary of the Department of Homeland Security (DHS), said on July 12.

“We can’t let people that make up the majority of asylum-seekers, who are not qualified, bring down the system and prevent truly qualified asylum-seekers from accessing protection,” Vaughan said. “So in the long run, this will actually strengthen our asylum system.”

The joint action by the Department of Justice and DHS is the latest in several attempts by the administration to curtail the number of meritless asylum claims. The immigration court backlog is close to 1 million cases, with asylum cases more than tripling between 2013 and 2018.

Previous: China given time as their industrial output plunges
Next: In Cuba, homeschooling will land you in prison