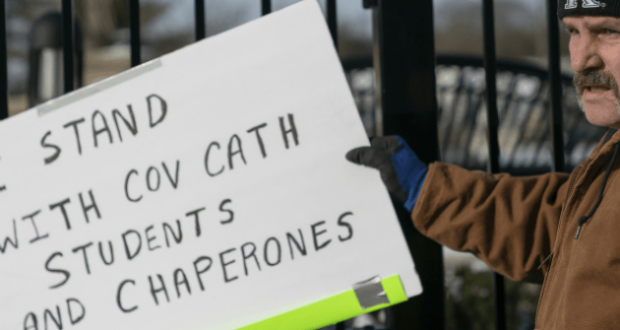 A superintendent has recommended the firing of a middle-school teacher accused of posting a series of erroneous and disparaging comments on social media.

The comments were directed against a teen she misidentified as being a Covington Catholic school student seen in a controversial video—which also was widely misrepresented in the media—last month.

The incident is widely seen to have shamed national media and Hollywood celebs for their quick rush to judgement. Many national media outlets have been forced to apologize and to revisit their policy of running immediately to the camera with unverified information based on tweets and rumors rather than fact-based reporting.

Now heads are beginning to roll.

Douglas County Superintendent Thomas Tucker has recommended the school board terminate middle-school teacher Michelle Grissom, a seventh-grade social studies teacher at Mountain Ridge Middle School in Highlands Ranch, after she wrongly claimed a Kentucky school student was involved in an incident in Washington on Jan. 18. In the post, she also called the teen a “Hitler Youth.”

Grissom made the comments in a now-deleted Twitter post that went viral, according to NBC affiliate KUSA-TV.

“His name is [omitted]. His twitter account is closed to non-followers so we don’t interfere with his training in the #HitlerYouth,” Grissom tweeted, reported to Complete Colorado.

The post caught the attention of the teen’s father, John Jackson, who told her that his son was not present at the rally and has never been to Washington. He said his 17-year-old son was actually at a basketball game in Kentucky.

“[O]n Saturday, Jan. 19 a teacher at ur school, Michelle Grissom posted a picture of my 17 yo son and a defamatory and untrue accusation regarding the incident that occurred in DC over the weekend..calling my son a #hitleryouth when I told her my son was not in DC but playing basketball she demanded proof, proof sent she finally acquiesced and apologized but has refused to take down her post and my sons picture,” Jackson wrote on Jan. 20.

“I hope this is dealt with appropriately and swiftly … my son was harassed and bullied as a result of this teachers rush to judgement ..totally abhorrent behavior and inexcusable actions that need to have consequences…SHE IS TEACHING YOUR STUDENTS!!!”

Superintendent Tucker said in a lengthy statement released during a Douglas County School Board meeting this week that he realized the incident has caused a lot of controversy in the community.

“I made a recommendation to the Douglas County School District Board of Education that Ms. Grissom be dismissed… That process begins with a recommendation being made to the Board,” he said.

“I understand that many in the community have strong opinions regarding Ms. Grissom and the circumstances giving rise to my recommendation. The District respects those opinions. However, to ensure that the process complies with Colorado law, while the dismissal process is ongoing, Douglas County School District will not provide further comment.”

Grissom received public backlash for her Jan. 19 posts. A website explaining the incident was made with its creators calling for her dismissal.

She was placed on paid leave on Jan. 23. The teacher has since apologized for her remarks and has resigned from her role on the teachers’ union board.

Covington Student Could Sue for Defamation

Nick Sandmann was the teen at the center of the the Jan. 18 incident in which Covington Catholic school students were falsely portrayed by many prominent media outlets, newscasters, media celebs and elected officials as having acted in a racist manner toward a group of native American activists.

After suffering threats and harassment, Sandmann could be suing multiple high profile media outlets and celebrities for defamation.

Sandmann’s lawyer, Todd McMurtry, sent letters on Feb. 1 to more than 50 people and companies, including The Washington Post, The New York Times, CNN, The Guardian, and NPR, as well as celebrities such as Bill Maher, Kathy Griffin, and Jim Carrey as well as Sen. Elizabeth Warren (D-Mass.).

The letters oblige the recipients to preserve all records related to the “Sandmann Matter.”

The incident occurred after the annual anti-abortion March for Life. The group of students, who were waiting for the bus near the Lincoln Memorial, were approached by several Native American activists led by 64-year-old Nathan Phillips. A person accompanying Phillips was filming the incident.

Several short video clips, enthusiastically spread by the media and celebrities, made it appear as though the students—a number of whom were wearing President Donald Trump’s red “Make America Great Again” hats—were chanting and cheering slogans in mockery of Phillips. Some media even claimed that the students were chanting “Build the wall,” which was later proven false.

As longer videos from the scene emerged, the students were actually revealed to have been cheering and chanting their school chant to drown out racist and offensive remarks being directed at them by a small group of Black Hebrew Israelites nearby.

“There was a rush by the media to believe what it wanted to believe versus what actually happened,” McMurtry told the Cincinnati Enquirer.

Many media and social-media users have retracted and corrected their initial articles and posts about the incident after reviewing the whoe video. But the initial coverage “permanently stained [Sandmann’s] reputation,” McMurtry said.

“For the mob to just go tear apart a 16-year-old boy is inexcusable,” he said. “He’ll never be able to get away from this.”