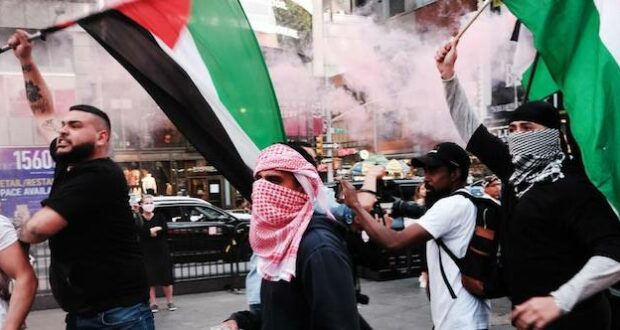 A pro-Palestinian protest in New York turned into a mob in which Jewish were attacked on the streets.

As the “Squad” continues to promote anti-Semitism, several other Democrats in Congress are pushing back.

Three Jewish House Democrats are calling on President Biden to appoint an ambassador-at-large to combat anti-Semitism that is surging in the United States in the wake of violence between Hamas and Israel this month. In a May 25 letter to the president, Reps. Josh Gottheimer, D-N.J., Elaine Luria,, D-Va., and Kathy Manning, D-N.C., said they are “deeply disturbed” by the recent surge of anti-Semitic incidents in the country.

“It is undeniable that this increase in anti-Semitic incidents has coincided with recent conflict in the Middle East,” they wrote. “It must be made clear that there is simply no excuse whatsoever for harassing or targeting people because they are Jewish. Blaming Jews for conflict in the Middle East or seeking to hold them collectively responsible for Israel’s government policies is anti-Semitic, and it is wrong.”

The representatives cited recent attacks on Jewish Americans in New York, California and Florida, saying that Jews across the United States are facing an “extraordinarily tense environment of fear and insecurity. We believe we need a united, all-of-government effort to combat rising anti-Semitism in this country.”

The lawmakers urged the president to nominate an experienced and qualified ambassador at large to monitor and combat anti-Semitism. The group also criticized recent “reckless, irresponsible anti-Semitic rhetoric” from elected officials, referring to comments made online by the progressive Squad.

Members of the Squad have come under fire recently for their controversial anti-Israel comments on Twitter as violence intensified between Israel and Hamas, a designated terrorist group since 1997, before a ceasefire agreement was reached on May 20. The 11-day conflict started when Hamas launched rockets into Israel over a court case to evict several Palestinian families in East Jerusalem that triggered riots.

Tagged with: ambassador anti-semitism biden congress democrats Israel middle east new york the squad twitter what is who is

Previous: Free online course reminds us why Americans need patriotism
Next: Where do experts say the housing market is headed?