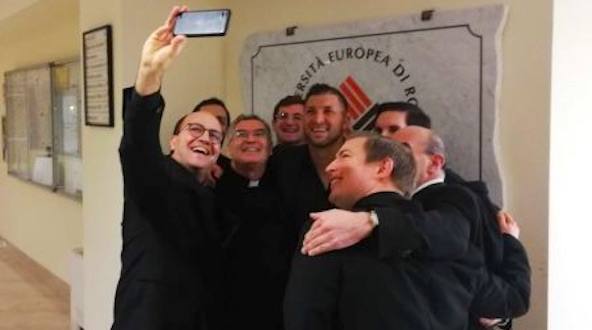 Tim Tebow, center, poses for a photo with Catholic priests during the Night to Shine prom event at the Pontifical University Regina Apostolorum in Rome, Feb. 4, 2020. (RNS/Claire Giangravé)

Tim Tebow gets help from Vatican for Night to Shine

Tim Tebow found himself bringing joy and hope to others in the Vatican last week with Night to Shine.

The worldwide event added a new partner this year when the first Night to Shine was held in Rome with the support of the Vatican. The Pontifical University Regina Apostolorum was host for the prom night, where people with disabilities had their photos taken on the red carpet, enjoyed a pizza buffet and danced the night away with pop songs selected by a DJ. 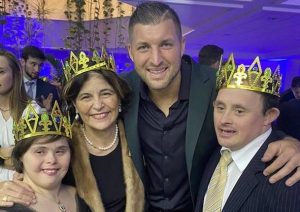 “It’s the first time we attended a party like this,” said Angela Agresti while pushing the wheelchair of her young daughter, who cannot speak, on the busy dance floor. They were invited by a friend and chose to come because “it seemed like an opportunity to be with others, which is not easy for them,” she said.

According to Tebow, the Hollywood glamour of the night speaks of a society that views red carpets as signifying importance and the people appearing on them as having a special value.

The athlete drew public attention as a Heisman Trophy quarterback in college. He went on to play for the Denver Broncos and New York Jets. Today, he plays baseball in the minor leagues for the New York Mets organization after announcing his retirement from football in 2016.

Though Tebow’s professional football career was short-lived, he made a lasting impression. His custom of kneeling to pray during games turned into a national phenomenon and became known as “Tebowing.” His parents, Pamela Elaine and Robert Ramsey Tebow II, served as Baptist missionaries in the Philippines, so faith always played an important role in his life, he said.

“My life was changed when I was 15 in the jungles in the Philippines and I met a man with his feet on backwards,” Tebow said, adding that after seeing how the village scorned and cast out people with disabilities, he decided to help them and found his calling.

In 2010, he founded the Tim Tebow Foundation “with a mission to bring Faith, Hope and Love to those needing a brighter day in their darkest hour of need.” The charity also includes hospitals, playrooms and orphanages.

More information about Tebow’s local appearance this week is available at www.kflbanquet.com.