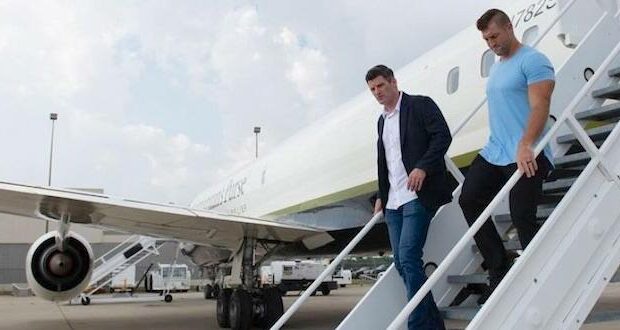 Samaritan’s Purse has partnered with Tim Tebow to bring aid to Afghans fleeing the Taliban.

The effort is ramping up as more than 300,000 people are said to be on the move in the country, desperately attempting to reach the border with Pakistan.

The humanitarian crisis is expected to worsen as the Taliban continues a door-to-door campaign seeking Christians and those who helped the U.S. during its 20-year fight to end its use as a terror base.

On Thursday, an Afghan in hiding communicated a horrific update: the Taliban is cutting the tongues out of interpreters who worked with the U.S. military.

Those actions are driving fear to the heart of millions of Afghans, especially those who live in Kabul.

For Afghans who were airlifted out by the U.S. and a half-dozen other nations, they left with little more than the clothes on their backs.

Samaritan’s Purse and other organizations have responded to calls for supplies. The group, in cooperation with Billly Graham Evangelistic Organization, airlifted supplies to evacuated families but also helped some evacuees leave. organizations to help evacuate Afghan refugees.

In one instance Samaritan’s Purse helped 700 individuals leave in just one day.

“We have been able to sponsor flights, bringing hundreds to safety,” an SP representative stated. “Our DC-8 cargo plane carried hygiene kits, medical kits, and members of our Disaster Assistance Response Team (DART), including medical personnel to provide additional capacity to medical facilities that are treating the sick and suffering.”

Franklin Graham shared photos of relief operations on Instagram while his son, Edward Graham, and Tebow flew on the organization’s plane to assist on the ground and raise the visibility of the need in the public’s mind.

“In addition to helping with evacuation flights from Afghanistan through partners on the ground, we sent our Samaritan’s Purse DC-8 loaded with supplies and a team to aid evacuees who have been able to get out of the country,” Franklin Graham wrote on Instagram.

“Protocols changed and evacuees weren’t even allowed to bring a suitcase when they left,” Graham added. “Our medical team was able to deliver a baby by C-section as soon as they arrived in one location. We thank God they were there to help.”

Graham also thanked Tebow for his ministry to staff and refugees.

“Tim was a great encouragement to everyone on the ground,” Graham said.

Tebow also shared on Instagram his thoughts towards the crisis in Afghanistan and the role of Christians worldwide.

“We have been heartbroken over the crisis in Afghanistan, the loss of our brave servicemen and women, and the loss of so many other precious lives,” Tebow told his 2.5 million followers. “With so much suffering around the world, we ask that you join us in prayer. Prayer for the country of Afghanistan, the evacuees, the families of those lost, Louisiana & Mississippi, Haiti, the flooding in TN, the fires out west, Covid-19, and so much more. We ask you to pray alongside TTF as we try to help fight for those who are hurting.”

“With so many challenges, we, the body of Christ have many opportunities to impact those directly affected by these crises,” he added. “In the dark, the light of Jesus shines brightest. As we pray over each of these crises, let’s all seek ways to serve those affected and be ready when God calls us to step in to make a difference in the life of another.”

Tebow concluded the post by quoting Romans 12:21 and encouraging fellow believers to “not be over come by evil, but to overcome evil with good.”

“We are made for these moments,” Tebow said. “Let’s pray always and serve strong together those in great need. To God be all the glory. We are praying over you!”

Edward Graham added: “On the trip: I was so encouraged by the volunteers and military personnel I saw loving the Afghans fleeing from the evils of the Taliban. After all the discouragement, know that America will rally and work together to help those suffering. Proud of our military and their families.”

Previous: Chaucer, author of The Canterbury Tales, faces cancel culture
Next: Are sex and gender the same thing?