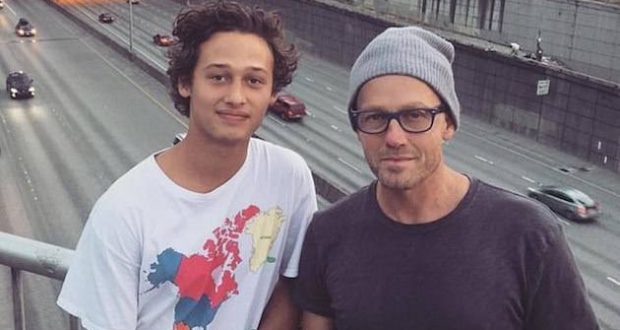 TobyMac, right, with son Truett. The young man died at his home Wednesday from circumstances that have not been released.

After the death of his son Truet Foster McKeehan on Wednesday, Christian rapper TobyMac released the final and heartbreaking text messages  the young man sent to him just days before.

TobyMac also shared the final text message exchange he had with McKeehan, praising his son for his “amazing” show in Tennessee. He told his son he had “infectious” joy, adding he is “very, very, very proud” of him.

In response, McKeehan wrote, “Love you, dad. Thank you so much. You have always believed in me, make me feel like a superhero.”

“Truett Foster McKeehan had joy that took the room when he entered,” TobyMac continued in a statement shared on his Facebook page. “He was a magnetic son and brother and friend. If you met him, you knew him, you remembered him.”

“Cause of death has not been determined,” the office stated. “Toby was traveling back from Canada and did not get home to be with his family until after midnight last night so there is no statement. We just ask that everyone please be respectful of their privacy during this time and allow them to grieve their loss.”

The Christian entertainer went on to praise his late son, who was a recording artist in his own right, for his talent, praising him for not taking “the easy route” and producing music as a young kid or teenager.

Instead, TobyMac wrote, McKeehan “wanted to live some life” and “wanted to be a man with scars and a story to tell” — an aspiration TobyMac said he “always admired, respected, and encouraged.”

McKeehan’s death comes as TobyMac was in the middle of a week-long tour in Canada. He postponed the remainder of his appearances to be home with his family in Tennessee.

Last year, TobyMac released a song called “Scars,” which he dedicated to McKeehan, who had moved out of the family home to venture out on his own.

As for his eldest son’s faith, TobyMac said McKeehan always had a “soft spot” in his heart for God, noting the Bible “moved him,” although he wasn’t a “cookie-cutter Christian.”

“But give me a believer who fights to keep believing,” the 55-year-old entertainer wrote of his child. “Give me a broken man who recognizes his need for a Savior every time. That’s who Truett was and how he should be remembered.”

The last time TobyMac saw McKeehan was at his son’s first show at a venue in Franklin, Tennessee, right before he left for his Canadian tour, the remainder of which he postponed after learning about his son’s untimely death at their family home in Nashville.

Previous: University of Missouri backs off ultimatum made to The Crossing church after sermon controversy
Next: ‘Sign from God’: Iranian finds Christ after ‘miracle’ of seeing Lord’s Prayer in movie