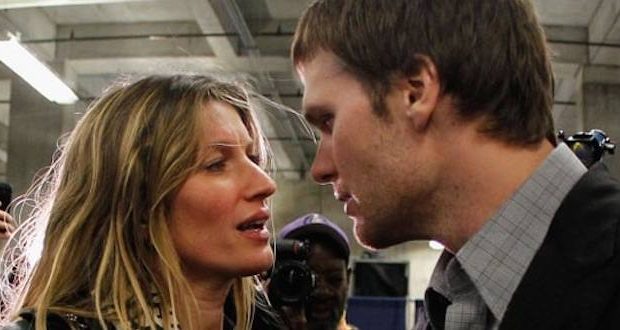 Tom Brady says wife is a ‘witch’, says they’re ‘into everything’

New England Patriots quarterback Tom Brady shocked attendees at a charity event in Boston this week after informing the crowd his wife uses witchcraft before his games. Brady, who recently won his sixth Super Bowl title, told the crowd his wife is a self-proclaimed “witch.”

While getting his playoff beard shaved for charity at Gillette’s World Shaving Headquarters, Brady said: “You know I’ve learned a lot from my wife over the years.”

“She always makes a little altar for me at the game, because she just wills it so much,” Brady said in the CBS Boston video. “So she put together a little altar for me that I can bring with pictures of my kids, and I have these little special stones and healing stones and protection stones, and she has me wear this necklace, and take these drops she makes, and I say all these mantras, and I stopped questioning her a long time ago.”

As the audience nervously laughed, Brady went on to share how he goes to his wife for predictions.

“About four years ago we were playing the Seahawks and she said ‘you better listen to me, this is your year, but this is all the things you’re going to have to do to win,’ and I did all those things and by God, you know, it worked,” Brady said.

In the video, he shares his wife, famous supermodel Giselle Bundchen, told him he’s lucky he married a “good witch.”

Apparently, Bundchen’s rituals are not the only spiritual element the Bradys dabble in for success. In a New York Times interview in 2015, Brady said his family has space for multiple faiths, stating “I think we’re into everything. I don’t know what I believe. I think there’s a belief system, I’m just not sure what it is.”

Also in 2015, it was reported by USA Today, Brady kept a four-inch bronze idol of the Hindu god Ganesh in his locker. The idol is said to be the “remover of obstacles” in the Hindu faith.

But there are a lot of Patriots players who might give another reason for the team’s success. These vocal Christians are bold about their faith in Christ.

In the lead up to the Super Bowl, Patriots Running Back Rex Burkhead shared  about many of the team’s Christian players. “So many great guys. So many solid guys. We’ve grown as a team because you don’t play for yourself! Those earthly glories, stats, awards, what not, you play for God’s glory! Just go out there and glorify Him with the talents He’s given you, make the most of those abilities to give all the praise to Him,” he said.

Team captain Matthew Slater said that before their 2019 Super Bowl victory, “This is not life and death. This is not the biggest thing that we’ll do. The biggest and most important decision we’ll ever make in our lives is what we do with the knowledge of Jesus Christ.” Slater continued, “We love what we do but we have to keep perspective on the greater good!”

“The way I look at football, it’s a tremendous opportunity not only to play a game that I love and provide for my family; it gives me a platform for what I believe is the most important thing, and that’s reaching people, connecting with people, building relationships and trying to show them the love of Christ,” Slater told Patriots.com in 2016. “I’ve always looked at football as a gift. It’s a vehicle that the Lord has given me to reach people.”

Previous: Times Square screens to be blasted with ultrasounds
Next: Kidnapper dead after high speed chase