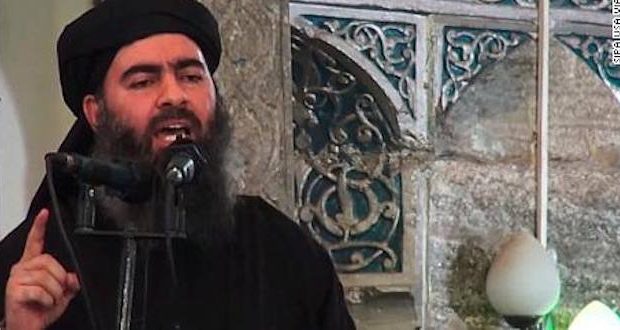 “Last night the United States brought the world’s number one terrorist leader to justice,” Trump stated.   “Abu Bakr al-Baghdadi is dead. He was the founder and leader of ISIS, the most ruthless and violent terrorist organization in the world.  Capturing or killing Baghdadi has been the top national security priority of my administration.”

Trump went on to praise the Special Forces who he said were in the compound for over two hours.

A U.S. army official briefed on the operation had told Newsweek that Baghdadi died as the result of a top-secret raid, while Saturday night the Defense Department told the White House it had been confirmed.

Trump stated he approved the top-secret mission over two weeks ago.

They raided a location that had been under surveillance for some time.

It comes just two weeks after the Express reported that U.S. Special Operations task forces had intercepted messages from Baghdadi.

Following the interception, it was reported that they were on his tail in Western Iraq.

The messages were said to be a recording between one of Al-Baghdadi’s team members to Amaq, a news agency linked to ISIS that operates on the dark web.

In the message, Al-Baghdadi is said to have asked all ISIS fighters who had been detained to rise up and fight.

Al-Baghdadi, an Iraqi national and leader of the ISIS terror group since 2010, was active in the insurgency against U.S. troops following the 2003 invasion of Iraq.

The fundamentalist Islamic cleric has been in hiding for the last five years and was last seen in July 2014 when he spoke at the Great Mosque in Mosul.

However in April, an 18-minute video that was published by ISIS media wing Al-Furqan, showed a man claiming to be Al-Baghdadi.

In the footage, shot from an unknown location, Al-Baghdadi claimed the Easter Sunday bombings in Sri Lanka, which killed 259 people, were in response to ISIS losses in its final stronghold of Baghouz in Syria.

Previous: Skillet frontman John Cooper willing to defend Christ ‘if it costs me my career’
Next: The Vatican is investigating Catholic priest charged with sexual misconduct in Kansas City and Wyoming