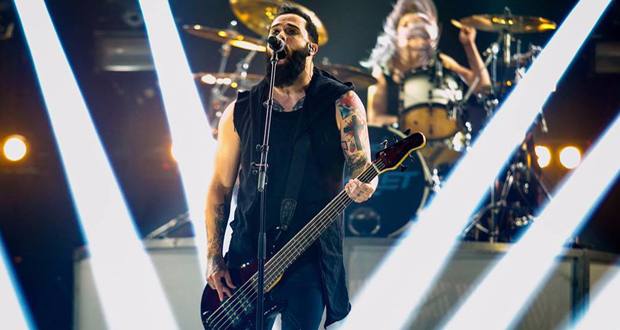 Skillet frontman John Cooper says he was trying to protect the “little ones of the faith” in a now-viral Facebook post and that he was willing to put his career on the line to take a stand for Christ.

He also wants Christians to be more courageous in defending Scripture.

Cooper told Christian Headlines he wasn’t “attacking one person” in the post and had been mulling over the issue “for several years.”

“It’s time for the silent majority of the church, to speak out and say, ‘Hey, we are reaffirming that there’s only one thing in this world that never changes. That is the unchanging, unerring Word of God,’” Cooper told Christian Headlines. “And I just thought, if it costs me my career, if it cost me some fans, I don’t even care anymore.”

Cooper posted his comments about two weeks after bestselling author and former pastor Joshua Harris said he was no longer a Christian and just days after Hillsong’s Marty Sampson said his faith was on shaky ground. In his Facebook post, Cooper encouraged Christians to stop following “influencers” and instead to rely on God’s Word.

Cooper told Christian Headlines he was reacting to multiple social voices who have criticized or contradicted God’s Word. He was surprised and frustrated, he said, that “no one” was “speaking out on the social media-verse as a peer.”

“We’ve got people that have an influence that are coming out so hard against the Gospel, and it’s dishonoring to God,” he told Christian Headlines. “… As the Bible would say it, I’m trying to protect the little ones of the faith – the weak ones of the faith that are followers of people and that don’t have a knowledge of the Word of God. And they hear these things and they go, ‘Oh, wow, I can’t believe that the church is unwilling to talk about hard things.’”

It’s time, he said, for Christians to be more diligent in defending the faith.

“The same Jesus that loves people and loves the world and is accepting – which is all true, by the way – is the same Jesus that came into the temple with the money changers and said, ‘Not in my Father’s house. Get this stuff out of here.’ He doesn’t like to be dishonored. He is the Lamb, but He is also the Lion. And I’m just ready to see Christians, nicely, stand up. And if somebody is going to dishonor God in public, you say, ‘Hey, I’m not trying to be rude but that’s not actually true.’

“… I’m just pleading with the church: Let’s get back to preaching the true, unerring Word of God, and everything else will fall in line.”

Social media, he noted, is a public platform. He urged people to think twice before posting.

“When you go on and start influencing people in a public way, when you’re an influencer, you’re kind of moving into that territory of leading people astray,” he said. “We need to think before we jump on our social media.”

Skillet is one of the most successful crossover bands in modern music, with 12 million albums sold and hundreds of millions of global audio streams. The latest album by Skillet, Victorious, was released recently. Cooper also collaborated with Z2 Comics for a graphic novel, Eden.