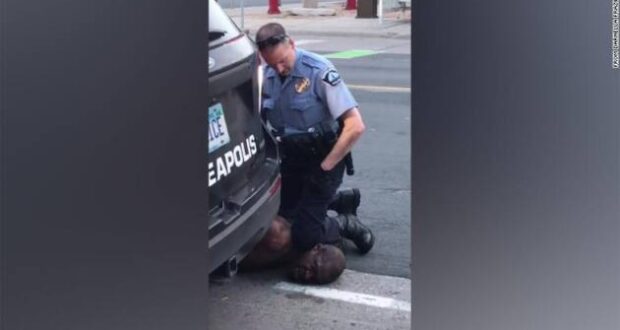 An officer keeps his knee on the neck of a handcuffed George Flloyd. Video shows Floyd was not resisting arrest as he pleaded for his life.

Minneapolis Mayor Jacob Frey is asking the Democrat governor to deploy the Minnesota National Guard to help with violent protests that have erupted across the state in response to the disturbing death of George Floyd. The video of the incident has shocked the nation.

On Wednesday and overnight, protests turned violent with dozens of buildings and businesses being burned to the ground as well as stores being looted. Video shows a Target store being emptied of goods.

News choppers captured the protesters running out of the Target with 60-inch televisions, rugs, furniture, clothing and other items from the store. Other looters were seen at a tobacco store, a Dollar Tree and a liquor store. Additionally, a supermarket and an AutoZone were looted.

As buildings burned, firefighters did not respond because of the violence. It is the worst looting in Minneapolis for decades.

On Thursday, Frey, a 38-year-old Democrat, called for an end to the violence as protests escalated, saying: “Please, Minneapolis, we cannot let tragedy beget more tragedy, the area along Lake has become unsafe. We are asking for your help in keeping the peace tonight.”

He continued: “We appreciate those that protested peacefully but now is the time to go home. Obviously, we have both instances of violence and fires. There are institutions, grocery stores and markets around Lake, that our community relies on… especially in times of a pandemic.

“Yes, we’re reeling. We are reeling, and I understand the anger and pain, and we need the public’s help in keeping the peace tonight. We need that in order to get through this together,” Frey added.

The mayor said he had been in touch with the governor’s office and has requested assistance from the state, explaining: “We’ve spoken several times. We’re receiving assistance in the form of state patrol. I have requested the National Guard as well.”

Protests have broken out across Minneapolis in recent days following the death of Floyd, a 46-year-old black man whom police sought to arrest outside a south Minneapolis grocery store on Memorial Day. The city, which is controlled by the Democrat Party, has come under scrutiny for its handling of the situation, as well as numerous past incidents of what African-Americans and many others see as unfair treatment by the police force.

A citizen’s cellphone video showed an officer—who has since been identified as 44-year-old Derek Chuavin—kneeling on Floyd’s neck for almost 8 minutes as the man repeatedly said he could not breathe and begged officers not to kill him. The video shows the both white and non-white officers involved in the incident.

He eventually became unresponsive, with one witness noting that his nose was bleeding. The footage spread quickly on social media.

Floyd, a father-of-two, was pronounced dead Monday night after he was taken into custody by authorities and on Tuesday, all four officers involved in Floyd’s arrest—Derek Chauvin, Thomas Lane, Tou Thao, and J. Alexander Kueng—were fired from the Minneapolis Police Department, according to a news release issued by the Minneapolis Department of Public Safety. Frey said this was the “right call.”

According to a Minneapolis Fire Department report published on Twitter from KARE 11, Floyd was unresponsive and “pulseless” when being transported into an ambulance by paramedics from the site of his arrest to the hospital.

“At my request, the FBI and the Department of Justice are already well into an investigation as to the very sad and tragic death in Minnesota of George Floyd,” Trump tweeted. “I have asked for this investigation to be expedited and greatly appreciate all of the work done by local law enforcement. My heart goes out to George’s family and friends. Justice will be served!”

Frey said in a news conference Wednesday that he “saw no threat,” adding that he “saw nothing that would signal that this kind of force was necessary.”

Also on Wednesday, President Donald Trump said he had ordered the Department of Justice and FBI to expedite an investigation into the death of Floyd.