Home / News / Tyreek Hill will not be suspended by NFL 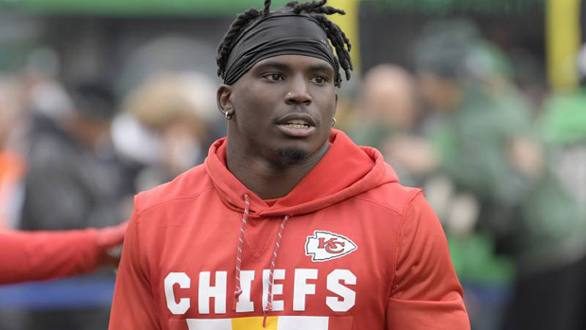 Tyreek Hill will not be suspended by NFL

The NFL has announced that Kansas City Chiefs wide receiver Tyreek Hill will not be suspended following an investigation into allegations of child abuse.

The NFL Network provided this statement from the league:

“Over the past four months, we have conducted a comprehensive investigation of allegations regarding Kansas City Chiefs wide receiver Tyreek Hill. Throughout this investigation, the NFL’s primary concern has been the well-being of the child. Our understanding is that the child is safe and that the child’s ongoing care is being directed and monitored by the Johnson County District Court and the Johnson County Department for Children and Families. In conducting our investigation, we have taken great care to ensure that we do not interfere with the county’s proceedings or compromise the privacy or welfare of the child in any way. The information developed in the court proceeding is confidential and has not been shared with us, and the court has sealed all law enforcement records. Local law enforcement authorities have publicly advised that the available evidence does not permit them to determine who caused the child’s injuries. Similarly, based on the evidence presently available, the NFL cannot conclude that Mr. Hill violated the Personal Conduct Policy. Accordingly, he may attend Kansas City’s training camp and participate in all club activities. He has been and will continue to be subject to conditions set forth by the District Court, Commissioner Goodell, and the Chiefs, which include clinical evaluation and therapeutic intervention. If further information becomes available through law enforcement, the pending court proceeding, or other sources, we will promptly consider it and take all appropriate steps at that time.”

NFL Network’s Ian Rapoport stated the NFL spoke to “multiple people on both sides of the allegations,” including Hill, although his ex-fiancée Crystal Espinal did not make herself available.

Hill is now able to attend training camp with the Chiefs and participate in all team activities.

In March, police were called to Hill’s home in response to an alleged battery “that lists a juvenile as the victim” and on another occasion regarding “child abuse or neglect” involving Hill’s three-year-old son.

Johnson County District Attorney Steve Howe has stated the investigation into Hill was no longer ongoing: “It is not an active investigation. As in any case, if we receive additional evidence we reevaluate.”

Despite not facing a criminal investigation, Hill could have still been subjected to discipline from the NFL under its personal conduct policy.

ESPN’s Adam Schefter stated that Hill had a “very thorough interview” when he met with the NFL on June 26.

After a four-month investigation, however, the league couldn’t conclude he violated any policy.

Hill will now be allowed to attend Chiefs training camp, which opens on Friday, July 26th.

The Chiefs issued a statement following the decision:

“We have been informed of the decision by the National Football League that, based on the available evidence, the league has not found that Tyreek Hill violated the NFL’s Personal Conduct Policy. Based on the information provided to us by the league, we have decided it is appropriate for Tyreek to return to the team at the start of training camp. The club fully supports the conditions for return laid out by the league and will continue to monitor any new developments in the case. We are glad to welcome Tyreek back to the team and look forward to the start of training camp next week.”

Hill also opened up about the decision with a statement on Twitter:

“The last few months have been very difficult for me, especially as a father. The false allegations originally reported in March were highly publicized and involved the care of my son. I am grateful for so many things and grateful for so many people who have supported me during this challenging time. I fully respect and accept the NFL’s decision. To the fans, friends and family that I have made in Kansas City: I love you and thank you for your continued support. To the NFLPA, Mr. Ned Ehrlich: thank you for your dedication, understanding and guidance throughout this process. To the NFL, Commissioner Goodell and everyone who assisted in this investigation: thank you for your time and for conducting a thorough investigation. I will not let you down. To the Kansas City Chiefs, Clark Hunt, Brett Veach, Coach Reid, the entire organization and the Chiefs Kingdom: you gave me a home when everyone doubted me. Thank you from the bottom of my heart. I love you all. I can assure you that I will continue to work to be the person, player, and teammate that you envisioned me to be. To my children, my beautiful children: I love you all dearly and I promise you all that I will continue to strive to be the best father, the best friend, the best role model, and the best mentor that I can be. I love you all.”

Kansas City plays the Cincinnati Bengals in the first game of preseason on August. 10. They will open the 2019 regular season September 8 against the Jacksonville Jaguars.