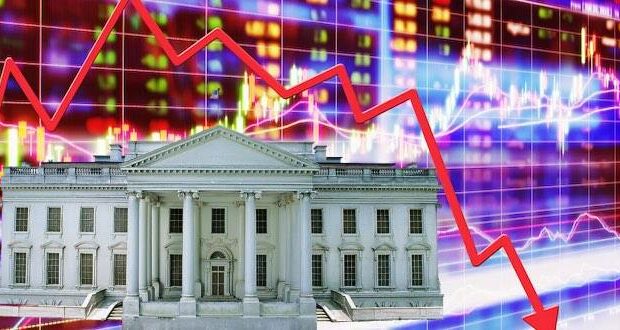 The United States is in recession. The realization came Thursday morning after the Bureau of Economic Analysis reported that GDP fell almost 1% in the second quarter. For the last 10 recessions, this has been the barometer by which recessions are determined. GDP tumbled at a 1.6% rate in the first quarter.

Thursday’s numbers indicate what the majority of Americans have already known–the economy has been struggling to stay above water but has now slipped below the waves. It comes during the historic monetary policy tightening cycle by the Federal Reserve under the Biden administration, which is trying to lower soaring inflation. Residential investment cratered, a sign of the housing market slowing as mortgage rates rise. Consumer spending on goods also turned negative.

The Biden administration had been working to preempt the Thursday report, fearing it would turn out to be in the red. The White House released a blog post wrongly asserting that two consecutive quarters of negative growth doesn’t necessarily indicate the country is in a recession.

The comments of Biden administration officials and Democrats, which attempted to redefine recession this week, were roundly criticized by many economists and Republicans. Critics pointed to video clips or news articles from those officials during previous recessions in which they admitted two negative quarters was the definition of recession.

“Democrats can’t solve the massive economic challenges our nation is facing because they won’t even admit there’s a problem to begin with,” said Calvin Moore, the communications director for the Congressional Leadership Fund, a super PAC that backs House Republicans. “Families need relief, but Democrats’ only solution is doubling down on the same failed policies that got us here in the first place.”

Since last summer, inflation has accelerated to crippling levels not seen in 40 years. Inflation, as gauged by the consumer price index, clocked in at a blistering 9.1% in the 12 months ending in June — a number that was higher than expected.

On Wednesday, following a two-day meeting, the Federal Open Market Committee announced it would increase its interest rate target by three-quarters of a percentage point. The central bank typically raises rates by just a quarter of a percentage point, so the move was akin to three simultaneous rate hikes and speaks to the desperation of officials in bringing down prices.

One positive aspect of the economy, which has provided a cushion for the Fed’s tightening, is the strong labor market.

Previous: Tony Dow, who played Wally on ‘Leave It to Beaver,’ has died
Next: Judge halts Air Force from punishing members over religious exemptions