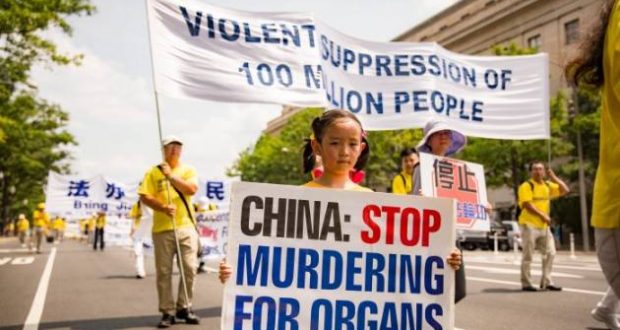 A young Falun Dafa adherent holds a sign asking for China to stop killing prisoners of conscience for their organs in a parade in Washington on July 20, 2017. (Benjamin Chasteen/The Epoch Times)

U.S. to bar entry of Chinese officials involved in persecution

The State Department is planning block Chinese officials from entering the U.S. in an effort to punish the communist regime for persecution of Christians and other religious minorities.

U.S. Customs and Immigration will enforce immigration controls against human rights violators in a move that could see Chinese officials involved in the persecution of  Christians, Muslims and Falun Gong being barred from entering the United States.

The cause of helping those suffering religious persecution has never been taken up to this extent by any previous American president.

The agency plans to increase its scrutiny of visa applications of foreign officials who have participated in severe violations of religious freedom, according a news release by U.S. website Minghui.org. According to the release, these officials could have their immigration or non-immigration visas (such as tourist or business visas) rejected. Those who have already been issued visas could be blocked from entering the country, the notice said.

Under the Immigration and Nationality Act (INA) Section 212(a)(2)(G), any person, while serving as a foreign government official, who is responsible for or have directly carried out particularly severe violations of religious freedom at any time, are inadmissible for entry to the United States.

Particularly severe violations of religious freedom include systematic, ongoing, egregious violations of religious freedom such as torture or cruel, inhuman, or degrading treatment or punishment; prolonged detention without charges; causing the disappearance of persons by the abduction or clandestine detention of those persons; or other flagrant denial of the right to life, liberty, or the security of persons.

An official from the State Department told various religious and faith-based groups about the intensified scrutiny. The official advised Chinese living in the United States that they could submit a list of Chinese officials known to be involved in the persecution, the news release stated.

Chinese Regime at War With Faith

Gary Bauer, commissioner at the U.S. Commission on International Religious Freedom, stated that he would welcome the U.S. administration’s steps in this direction.

An April report by the commission, an independent federal body that advises the U.S. government and Congress on religious freedom issues, highlighted that over the past year, the Chinese regime has ramped up its persecution of religious groups, including Falun Gong practitioners, Uyghur Muslims, Christians, and Tibetan Buddhists.

Jennifer Zeng and Frank Fang contributed to this report.

Metro Voice is an Amazon Associate. To learn more about faith under fire in China, check out “The Heavenly Man.”