Home / News / National / US border with Mexico may be closed 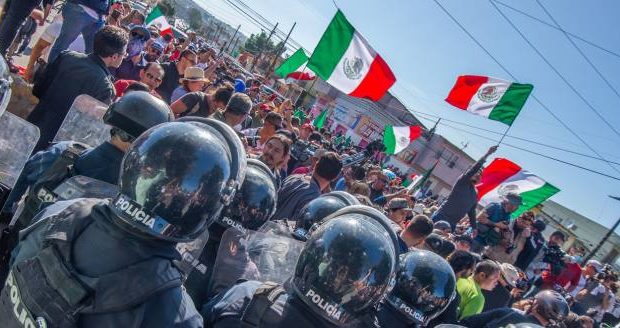 US border with Mexico may be closed

As more Central American migrants reach the border, mayhem and violence are now being reported.

Television footage on Sunday showed a crowd of immigrants trying to storm the U.S. border in Tijuana, near San Diego. The rushing of the border prompted U.S. Border Patrol agents to close the San Ysidro port of entry to both foot and vehicular traffic on Sunday morning through late Sunday afternoon.

In recent days, Mexican residents of Tijuana have been protesting by the thousands against the immigrants calling them “invaders,” using the same language President Trump was criticized for using during the last two months. In fact, the mayor of Tijuana has called the arrival of the caravan a threat to Mexican national security and has asked the world to intervene.

It got worse over the weekend when some of the caravan members tried to rush into the U.S. outside the port of entry, federal agents fired tear gas to turn them back, press reports said.

President Trump is said to be contemplating, along with US Border Security, the total shut down of the border to ensure an orderly processing of those seeking asylum. He also pointed a finger at Democrats for partly causing the problem.

On Sunday, Trump tweeted, “Would be very SMART if Mexico would stop the Caravans long before they get to our Southern Border, or if originating countries would not let them form (it is a way they get certain people out of their country and dump in U.S. No longer). Dems created this problem. No crossings!”

Trump last week said a government shutdown is possible if he doesn’t get funding for a border wall, something Democrats oppose.

Sen. Amy Klobuchar (D-Minn.), asked for her response to that tweet on ABC’s “This Week” with George Stephanopoulos responded:

“We have tried to negotiate with him but he won’t take yes for an answer,” the senator responded. “You look at this, we tried to negotiate on the Dreamers, and that was led by reasonable Republicans Mike Rounds, a senator from South Dakota, and Johnny Isakson, the senator from Georgia. I was in that group, a small group of us that were working to find a way out with border money as well as making sure that we protected the Dreamers, something a vast majority of Americans supported,” Klobuchar said.