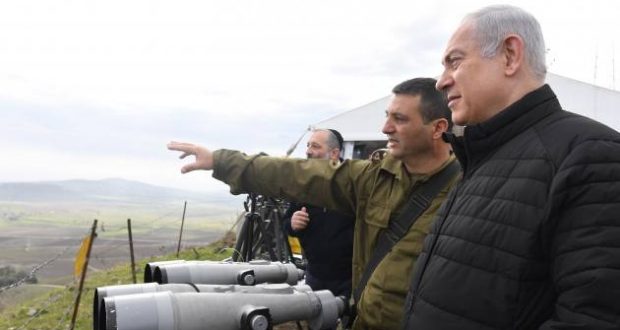 Israeli Prime Minister Benjamin Netanyahu and Security Cabinet members get a tour with the North Front Command in the Golan Heights on Feb. 6, 2018. Credit: Kobi Gideon/GPO.

The resolution was adopted in a U.N. General Assembly committee by a vote of 151 to 2, with only the U.S. and Israel voting against measure, while other 14 countries abstained on Friday. The resolution, known as “The Occupied Syrian Golan,” is a non-binding measure that is voted on by the U.N. General Assembly’s Third Committee every year that condemns the “illegality of the decision” by Israel “to impose its laws, jurisdiction and administration on the occupied Syrian Golan.”

In announcing the decision, U.S. Ambassador to the United Nations Nikki Haley said that the resolution is “plainly biased against Israel.”

“Given the resolution’s anti-Israel bias, as well as the militarization of the Syrian Golan border and a worsening humanitarian crisis, this year the United States has decided to vote ‘no’ on the resolution,” she said.

Israel gained control of the Golan Heights during the 1967 Six-Day War. After Israel briefly lost the territory during the 1973 Yom Kippur War, Israel and Syria established a U.N.-monitored ceasefire line in the region, with Israel taking control of the western two-thirds of the area. In 1981, Israel annexed the Golan when it extended Israeli civil law to the territory. However, the United States and the international community have never recognized this claim, despite the territory being under Israeli control for more than half a century. 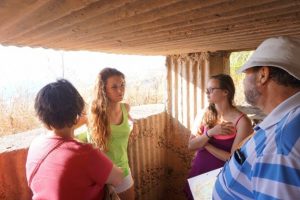 Inside a Syrian bunker. During a 2015 trip to Israel, the publishers of the Metro Voice and their daughters visited the Golan which consists of the eastern shore of the Galilee. Here, their tour guide Moshe explains the military significance of the Golan from inside an abandoned Syrian bunker that, before 1967, fired upon Israeli fishermen and schools below.

More recently, the Golan Heights has acted as a strategic buffer for the Jewish state against the ongoing civil war in Syria. Yet as the regime run by Syrian President Bashar Assad, with Iranian and Russia help, has beaten back most rebel groups operating in southern Syria and re-established control of the region, Israel has grown increasingly concerned with Iran establishing a permanent presence on the Syrian side of the border.

“This is a long time coming. From very early on in the Trump administration, there have been voices in Washington, as well as in Israel, calling for the move,” Jonathan Schanzer, vice president for research at the Foundation for the Defense of Democracies, told JNS.

According to Schanzer, a number of justifications have been put out there regarding altering U.S. policy on the Golan.

“They vary from observers who say Syria is barely a country any longer due to the civil war, as well as the counterfactual proposition that had Israel ceded the territory to the Assad regime years ago, one could imagine how dangerous the map would look today. The other argument is Israel has effectively solidified control over the Golan and there is no going back, regardless of what happens in Syria,” he said.

“Another argument is that given the mass murder in Syria, nobody should provide Assad with positive reinforcement, and should do a full campaign to delegitimize him and his rule.”

Nevertheless, Schanzer believes that the core of the move by the United States here is that this is part of the Trump administration’s policy of ending “Israel bashing” at the United Nations.

“This looks like an interim step,” Schanzer said of the vote. “I don’t necessarily believe this is the last step that will take place here. It’s part of the Haley strategy of defending against Israel-bashing and doesn’t change anything regarding facts on the ground. Could be part of a more official move by Washington down the road.”

‘No sane person thinks the Golan will be returned to Assad’

Israeli officials were quick to praise the decision by the United States.

“The change in the American voting pattern is another testament to the strong cooperation between the two countries,” said Israeli Ambassador to the U.N. Danny Danon. “I thank Ambassador Haley for her continued steadfastness with Israel and the truth. It is time for the world to distinguish between those who stabilize the region and those who sow terror.”

Strategic Affairs Minister Gilad Erdan also commented on Twitter: “The Golan is part of Israel and it will always be. There is no sane person who thinks that the Golan will return to the murderer Assad and the Iranian regime, which is trying to establish a ‘Syrian Hezbollah’ in the region.”

Israeli Prime Minister Benjamin Netanyahu has been outspoken in stance that the international community should recognize Israel’s sovereignty in the Golan Heights, especially in light of the growing threat posed by Iran and its terror proxy, Hezbollah.

The Israeli leader has also held out hope that the United States would recognize Israel’s claim, especially following last year’s decision on Jerusalem.

However, in a late August visit to Israel, National Security Advisor John Bolton said “there’s no discussion of it, no decision within the U.S. government.”

Bolton said that while the Trump administration understands Israel’s concerns regarding the Golan, “there’s no change in the U.S. position for now.”

Professor Eugene Kontorovich, director of International Law at the Jerusalem-based Kohelet Policy Forum and professor of international law at George Mason University in Washington, D.C., said that Israel’s control of the Golan is both legal and a recognition of the facts on the ground.

“U.S. recognition of the Golan as Israel’s is an accord with international law and reality. Failing to do so only encourages the ambitions of the Iran-Syria axis to reconquer the territory,” he said.

Nevertheless, Kontorovich said that the U.S. decision on the U.N. resolution was a step in the right direction.

“Hopefully, Friday’s U.N. vote is a step in this direction; in any case, it is a welcome rebuke to the U.N.’s practice of passing dozens of biased resolutions targeting Israel, while empowering despots like Assad.” 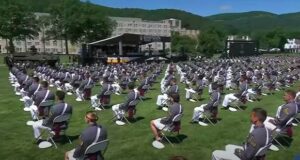