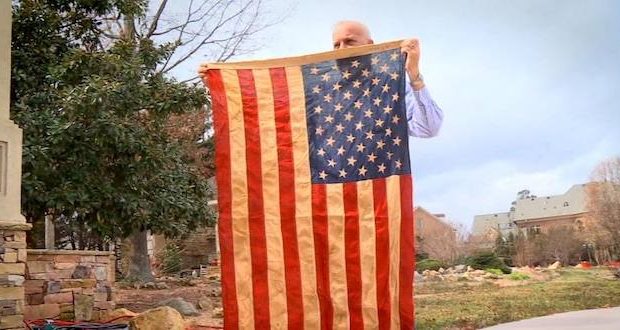 Vietnam vet Richard Oulton was forbidden from flying the American flag from a pole on his own property.

After a decades-long fight with his home owners association, a Vietnam veteran is proudly displaying an American flag at his home.

Richard Oulton recently re-installed a flag pole that was at the center of a dispute with Wyndham Homeowners Association in Henrico County, Virginia.

Nearly two decades ago, the HOA group in charge of the private community told Oulton, a medic during the Vietnam War, that the pole flying an American flag violated neighborhood by-laws.

When Oulton refused to take the flag down, Wyndham sought to settle the dispute by taking Oulton to court.

Oulton was found guilty of violating Wyndham’s by-laws and he was forced to take the flag down.

“I’m standing in my front yard being told my American flag is a visual nuisance and I can’t fly it in support of the troops in Iraq. I think it’s horrible but I have to comply,” the Marine veteran said at the time.

For Oulton, the American flag that waved proudly in his yard symbolized something more than the love he had for his country. He said the flag with stars and stripes was a commemorative object that paid homage to the memory of the brave men and women who once fought the Vietnam War with him.

Oulton did not give up his fight. Two decades after he was forced to take the flag down, he set out to battle again. This time, he had Virginia legislator and former Navy Seal John McGuire on his side.

But a lot has changed since that first dispute. A noticeable shift in the HOA’s management had taken place. Back when it started, the HOA was under the control of the developer, but today it’s in the hands of the homeowners.

Oulton explained the HOA “asked us to poll our neighbors and we polled all of the neighbors that were adjacent, nine houses and was 100 percent support.”

After two court appeals and two decades, Oulton and Del. McGuire convinced the HOA to let the flag from the Vietnam vet’s bunker soar proudly on his property.

Oulton was shocked by this victory over HOA, saying, “This is something I just didn’t ever think was going to happen but I kept trying.”

Oulton says he held onto the flag as a reminder of what he refers to as a “historical timestamp” in American history. And because of the new homeowners association and Del. McGuire’s help, he now has a chance to share this memory with others.

“Our men and women in uniform oftentimes risk their life or even sacrifice their life for freedom and I think the least we can do is get a flag pole up so he can remember his brothers,” added McGuire.