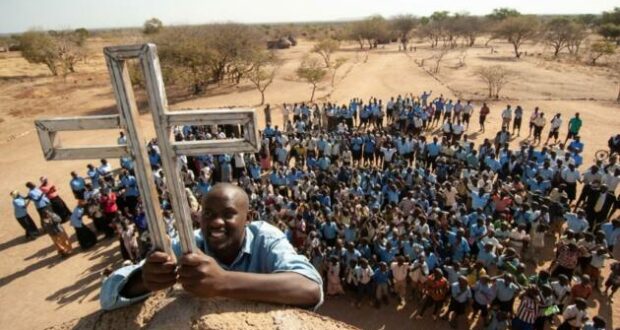 Installing a cross on a new church in South Sudan. Photo: Samaritan's Purse.

In this installment of “Watch and Pray” we look at South Sudan. column.

No one can know for sure the total number of letters written by the Apostle Paul, likely in the hundreds. We are certain of only seven: Galatians, 1 Corinthians, 2 Corinthians, Romans, Philemon, Philippians, and1 Thessalonians. What we can be sure of is that Paul’s concern and burden for the body of Christ extended beyond more than one country.

This month we focus once again on Africa: South Sudan, a country in great turmoil and need of prayer.

The most recent peace agreement was forged between nine warring factions, a clue to just how stressed daily life can be. At its base the problem is greed, a desire to control the natural resources and thus the money. The next set of players are the tribal groups, a number of which are predominantly Christian.

As in all countries – even ours – the politicians play one group against another with actual bribes or legislative favors. Which brings us to our first prayer need: Integrity and cooperation between Christians. This often is made difficult by tribal loyalties. Paul addresses this need of Christian unity in at least two of his epistles. I hope we might pray for the all denominations in South Sudan to meet together and seek UNITY.

The second and perhaps even more difficult prayer need is for tribal groups to put their loyalty to Christ ahead of their loyalty to their tribe. Paul also had this difficulty, one common to all new converts…putting off the old man and putting on the new. Mixed in with the tribal divisions is a need to forgive.

In 2005, we began to rebuild 500+ churches in Sudan. Through this program many of the churches were built in what is now South Sudan. Follow along next week as we look at how our team is continuing to support Christians in South Sudan. #FlashbackFriday https://t.co/SJK89z5cN1 pic.twitter.com/96gE3ji45A

Feuding between tribes is at the root of MUCH of the difficulty in south Sudan.

It is estimated that over last two decades there have been over two million violent deaths. But as in Corinth, Galatia etc. there is hope…hope in God and in prayer.   May we all believe this and pray for Harmony in South Sudan once a day for an entire month. We have the same all-powerful God as Paul.

Third on this prayer list is for food and a safe place to sleep for hundreds of thousands of displaced families. The WFP (world food program) has a very sound record of getting food to people that are not easy to reach. One other group I have watched for years is the International Salvation Army.

Mark your check “South Sudan” or the country of your choice.

Otherwise send a gift through your local church, denomination or missionary.

Someone you all could pray for. Just in Paul’s day Christianity moves through our relationships with others. It is a personal thing requiring us to get personal ESPECIALLY with souls halfway around the world.