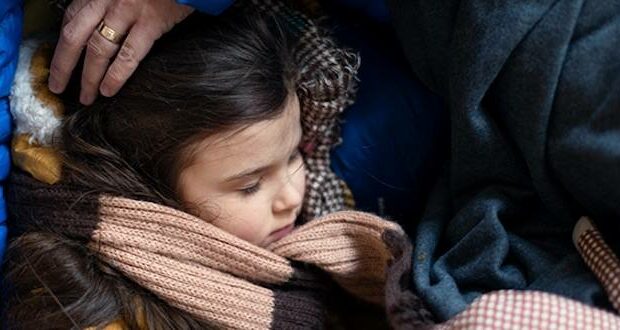 In Alaska, A Russian-Speaking Church Becomes A Hub For Helping Ukrainians.

An elevated cross reaches toward the blue sky at a nondescript corner of Alaska’s largest city.

Viewed from the right vantage point, the cross towers over the snow-capped mountains that adorn Anchorage’s horizon.

Inside a nearby church building, a few dozen immigrants from Ukraine, Russia, and other Slavic nations gather in a circle at a Thursday night prayer service.

Prayer requests on this sunny, chilly evening—the sun won’t set until after 9 p.m.—focus on the war in Ukraine.

‘We have to do something’

Zori Opanasevych, a 31-year-old mother of three, rested her chin in clasped hands as she begged God to intervene.

In the heart-wrenching stories of ordinary families caught in Russia’s attack on Ukraine, Opanasevych sees herself. In the children’s frightened faces, the Ukrainian-born Christian can’t help but envision her own kids—ages 5, 7, and 10.

“That could have been me there right now in Ukraine,” she said. “I could be using my body to shield my children from bombs right now.”

Instead, Opanasevych—whose family moved to the United States when she was 7—has put her life on hold to organize a faith-based relief program for her homeland.

Previously, she homeschooled her three children. But when the Russia-Ukraine war started nearly two months ago, she enrolled her kids in public school. She needed more time to devote to the cause.

“We can’t just sit here—we have to do something,” said Opanasevych, a former refugee assistance and immigration services staff member for Catholic Social Services in Anchorage.

READ: Russia invades  Ukraine: Here’s how we got here

Through the relief program that Opanasevych leads, New Chance Christian Church has become a hub for Anchorage’s efforts to help Ukrainians.

After the war began, U.S. Sen. Dan Sullivan, who is Catholic, addressed New Chance members and other Slavic immigrants in the church’s sanctuary.

“I think one of the most important things we’re all doing together—as Alaskans, as Americans—is we are praying with our whole heart for what’s happening in Ukraine and (to) many of your loved ones,” Sullivan said in English as his words were translated into Russian. “We just know how heartbroken and sickened we are with what is happening.”

New Chance’s relief program is distributing food and other necessities to people in Ukraine, Opanasevych said.

“We have sent lots of things and money over,” she said, specifically noting that 50 bulletproof vests were provided to protect volunteers driving supply vans.

Among the New Chance volunteers who have traveled to Ukraine to help is Chris Lujan, who is working with a partner church in that besieged nation.

“Refugees running from the invasion … have been staying here overnight, getting money and supplies, and getting sent to our contacts in Poland to get put into the refugee system there,” Lujan said in a statement posted on the relief program’s Facebook page.

In addition to work in Ukraine, New Chance is making plans to welcome refugees to Alaska over the next year or two, Opanasevych said.

“We’re preparing to help facilitate the transportation of people to Alaska directly,” she said. “The tourism industry is huge in Alaska, with fisheries and so forth, and we have a huge labor shortage thanks to COVID and everything else.”

A church for Russian speakers

Opanasevych’s family immigrated to Seattle in 1998 before relocating to Alaska a few years later.

In Anchorage, her missionary parents, Sergey and Alla Ilnitski, saw an opportunity to share the Christian gospel with Russian-speaking immigrants.

The congregation began meeting in the Ilnitskis’ home in 2002, but Pastor Gary Morton of Anchorage First Assembly of God soon invited New Chance to share its building.

Over the years, the Assembly of God congregation also has welcomed Latin American, Filipino, and Samoan groups to use its facilities.

“Anchorage has something around 100 different languages spoken in our community,” said Morton, who is originally from Amarillo, Texas. “So there’s a lot of wonderful opportunities for ministry to people for whom English is not their first language or even their second language.”

Now, Morton’s church is rearranging its building’s contents to allow for storage of equipment and other needs for the Ukrainian relief program.

“It’s a heartbreaking story,” Morton said. “But typical of the body of Christ, there’s a deep passion to reach out to hurting people. And that attitude is shared by everybody here in our community.”

‘You can’t close your eyes’

At the prayer service, Sergey Ilnitski, 59, crouched on his knees with his eyes closed and his clenched hands outstretched.

As a Pentecostal teen in the 1970s, Ilnitski said, he faced religious persecution in Soviet-era Ukraine. Many churches were underground.

Now, the preacher and musician’s heart aches for his friends and relatives who remain in his home country.

“Sometimes, there’s a lot of emotions, and you want to cry, and you have all this to express to God,” Ilnitski said. “Others, you just stand, and there’s nothing to say. You just stand before God.”

He closed his eyes as he reflected on the sweet aroma of flowers that bloom in April in his home country. But now, he lamented, there’s only “the smell of corpses.”

Across the room, Oksana Vakulich raised her right arm toward heaven as she knelt and prayed.

Vakulich, 36, is the oldest of the Ilnitskis’ six children. She was 12 when her family left Ukraine.

Just a few years ago, the mother of five returned to Ukraine for the first time with her husband, Dmitry, New Chance’s associate pastor and a native of Belarus.

Now, more than 10 million Ukrainians have fled their homes.  Over half of the nation’s children are now displaced.

“You can’t close your eyes on what’s happening,” said Dmitry Vakulich, who grew up speaking Russian. “You’d have to be heartless.

“If we believe we’re filled with God’s love, we have to have compassion because God has compassion for people who suffer,” he added. “So we pray for them. We try to support them financially.”

The associate pastor said he has relatives in Belarus, Russia, and Ukraine.

“So which one do you hug?” he asked, pausing just a moment. “You hug all of them. But what gets me is that there is so much hatred between the Russians and the Ukrainians.”

However, New Chance members have managed to avoid the politics, he said, and focus on loving each other as Jesus instructed.

Ukraine and Russia “are neighboring countries. Russians are our brothers,” she said. “I can’t say they’re the enemy because they’re not. And everybody understands that it’s just the leadership.”

Previous: CNN slams children’s books that don’t espouse liberal ideology
Next: How Christians can help shape the broader culture, not just their own