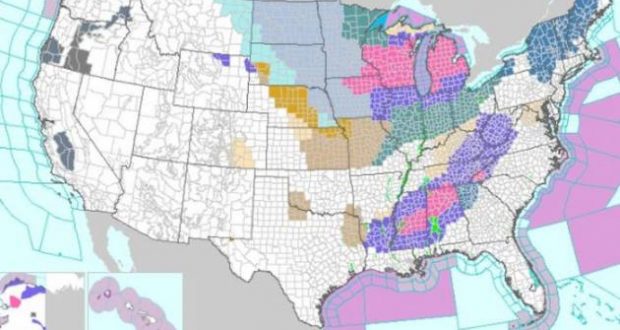 But don’t keep it out too long on Wednesday as temps may stay in the single digits.

A so-called “polar vortex” is slated to descend on the United States bringing arctic temps as far south as as Springfield, Missouri with some weather forecasters saying wind chills could be -25 to -35 in Kansas City and northern Missouri.

In Missouri, it was announced that mail delivery would stop on Wednesday in northern counties and resume after temps and wind chills return to normal–yet still cold conditions. It’s not just too cold for postal workers, schools across the region are also cancelled for Wednesday and some even Thursday.

It’s the same in many midwestern states.

By Wednesday and Thursday morning, lows might hit in the minus 20s (without the wind chill factored in) in the Twin Cities in Minnesota, and in the minus teens and 20s in Des Moines, Detroit, and Milwaukee, Weather.com reported, saying that they will be the coldest temperatures in 20 years.

“Some of the coldest air in decades will pour in across the Northern Plains, Midwest and Great Lakes with windchills in the -40 to -50 degree range and air temperatures below zero for several days,” Fox News Senior Meterologist Janice Dean said on Jan. 28. “This will be dangerous and potentially deadly for these regions, and people need to stay inside.”

The National Weather Service based in Pleasant Hill, Mo. says dangerous conditions are in store for the region.

In Topeka and NE Kansas, as temperatures hit single digits and wind chills fall below zero, experts are warning people about the dangers of hypothermia and frostbite.

Dr. Tim Borchers, with Cotton O’Neil Family Medicine in Topeka, says people should wear at least three layers when going outside. One layer to wick moisture away, another to insulate and a third to block the wind.

Dr. Borchers says people should limit their time outdoors. He says serious frostbite can occur in less than 30 minutes and it can often take 24 to 48 hours to see the full extent of the damage.

Dr. Borchers also warns people to look out for signs of hypothermia. Signs of hypothermia include: intense shivering, altered mental state, confusion and drowsiness. If you experience these you need to seek medical attention.

Warmer days are coming, though, as 30s and 40s return for Friday, and high temperatures for Saturday and Sunday will be back into the upper 40s through the mid 50s.