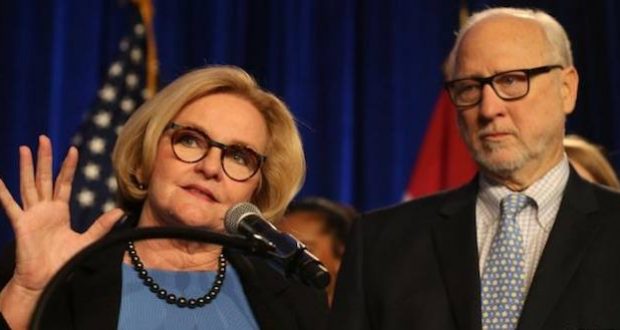 Claire McCaskill could not escape her voting record as she concedes Tuesday night.

In what could still be considered a stunning defeat, Democrats took control of the House without the “blue wave” that was projected to sweep Republicans from power in state governorships, the Senate and local elections.

Instead, Republicans picked up an amazing number of seats in the Senate and lost far fewer seats than the media had expected in the House. They also retained majority control of the nation’s governorships.

For weeks, Democrats and media outlets had been promoting three up-and-coming Democrat stars with one talked about as a future presidential contender. All three Democrat candidates went down in flames last night: “Beto” O’Rourke lost to incumbent Ted Cruz in Texas, Democrat Stacey Abrams lost to Brian Kemp for Governor of Georgia and Andrew Gillum lost to Republican Ron DeSantis for Governor of Florida.

Three long-time incumbent Democrat Senators were sent packing including Missouri’s Claire McCaskill who seemingly could not escape her liberal record though she ran as a moderate. She has been replaced by newcomer Josh Hawley, a conservative Christian from Central Missouri.

But the news was not all good for Republicans in the Kansas City area. Kevin Yoder lost his re-election to Kansas’ 3rd Congressional district. He was beat by Sharice Davids, an ultra liberal Democrat who, some say, had a campaign that was virtually run by the state’s liberal media conglomerates including the Kansas City Star and Public Radio. The Star had even allowed her to read her answers from a cheat sheet during her one and only debate with Yoder.

The loss of the 3rd District was painful for Republicans.

Real Clear Politics projected a gain of just 26-33 seats for the Democrats, who needed a gain of at least 23 seats to secure the 218 seats needed for a House majority. If that holds, Democrats will be forced to govern with a slim majority in the House. That is far fewer than the 66 seat margin they had expected and pollsters had said would happen.

Democrats say the swing of power in the House will help them “keep a check” on the Trump administration’s policies where they could block further tax cuts, deregulation, and changes to America’s immigration laws, as well as the building of a U.S.–Mexico border wall. Democrats had said they would also immediately start impeachment proceedings against President Trump and Supreme Court Justice Kavanaugh should they win.

With such a small margin of control, it is not sure if Democrats could even proceed on the two biggest campaign promises many of their most liberal members had promised. Plus, it may not play to the more moderate suburban voters who voted for a “check” on power but not a lengthy impeachment process that would divide the country further.

White House Press Secretary Sarah Sanders told reporters earlier in the evening that no matter the result in the House, the Trump administration’s agenda was not going to change and was still focused on lowering taxes, growing the economy, creating jobs, defeating ISIS, remaking the judiciary, and tackling the opioid crisis. She said they would also continue looking at boosting infrastructure and trying to get the Democrats to come to the table on tackling illegal immigration.

Reuters reported that “Democrats rode a wave of dissatisfaction with President Donald Trump to win control of the U.S. House of Representatives” and cited the Republican campaign as “divisive,” without passing comment on the campaign strategy of the Democrats. But that dissatisfaction must not have run deep.

At a campaign rally in Fort Wayne, Indiana, on Nov. 5, Trump shared his observations of the political climate in the United States with the crowd. “Every day since [his win in 2016], the failed old ruling class have been trying to claw back their way into power.

“They’re not having an easy time,” the president added. “I shouldn’t say this because I do want to unite … but the fact is we’re driving them crazy.”

Despite his party losing the House, Trump wrote on Twitter, “Tremendous success tonight.”

Earlier in the evening, major media and political commentators announced that the GOP had likely secured its Republican majority in the Senate and was looking to extend the lead by four to five seats.

Projected results in the 36 gubernatorial races projected a blue creep, with the Democrats likely picking up five governors’ seats, according to Real Clear Politics. Before the midterm election, Republicans held 33 of the 50 governors’ seats while the Democrats held 16. Gov. Bill Walker in Alaska was an independent but has stood down from re-election in the midterms.