Home / Entertainment / 5 Passover movies not to miss this month 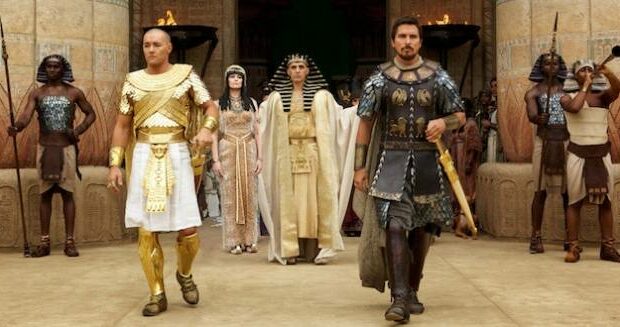 A scene from Exodus: Gods and Kings

5 Passover movies not to miss this month

Passover is observed each year by the Jewish community to remember and celebrate the exodus of the Israelites from their slavery in Egypt. Also known as Pesach, Passover is a major Jewish holiday that occurs on the 15th day of the Hebrew month of Nisan, the first month of Aviv, or spring.

As a result, the holiday takes place in either March or April for a week. This year, Passover begins on the evening of April 15. It ends on April 23.

In the Book of Exodus, God commands Moses to tell the Israelites to mark with lamb’s blood above their doors so that the Angel of Death will pass over them. If you don’t know much about this holiday and you’re looking to learn more, you might want to consider watching a movie about it. There are many movies that air on television around Passover, but you can also find them on streaming services year-round.

Below are five insightful movies and episodes about Passover, for adults and kids alike. Editor’s note: Next week we’ll look at 5 Easter movies not to miss.

This biblical epic directed by Cecil B. DeMille — featuring legendary actor Charlton Heston as Moses — has proven to stand the test of time. It is aired annually by several networks, attracting millions of anticipating viewers each time. The film goes into great depth exploring what Moses’ life was like and the challenges he endured, keeping people watching year after year.

Although the visuals are not the most enthralling today, the film did win an Academy Award for Best Visual Effects in 1957. This G-rated film is great for the entire family to watch. However, with this movie being almost four hours long, you may have to watch it in pieces. It often runs on broadcast television during the two weeks prior to Easter.

This one might be a surprise to some. When you think of the Nickelodeon cartoon “Rugrats,” Passover probably doesn’t immediately come to mind. This episode aired during the third season in April 1995 and is set at a family gathering of two of the main characters, Tommy and Angelica Pickles.

Angelica expresses that she doesn’t understand why they have to celebrate Passover. Her grandpa goes on to tell her the story of Moses as she imagines herself as the Pharaoh of Egypt throughout the episode. Although the cartoon no longer airs, you can find the episode on Paramount+, as well as iTunes, Google Play and YouTube.

This animated DreamWorks movie is a must-watch. Starring actress Sandra Bullock and actor Jeff Goldblum, the film takes viewers on a journey through the book of Exodus, prominently focusing on the life of Moses. The movie follows his life from the time his mother placed him in a basket in the river to when he receives the Ten Commandments from God on Mount Sinai.

Whether you’re looking for an engaging way to educate your kids about Passover or you’re just a fan of animated movies yourself, “The Prince of Egypt” does a great job of telling the story.

Did you know that some Sesame Street characters also celebrate Passover? “Shalom Sesame” is the Israeli version of the popular children’s TV show “Sesame Street,” teaching children about Judaism and its traditions.

In this episode, Grover and the Sesame Street gang learn what a “Seder” is — the Passover feast commemorating the exodus — and how Jews prepare for the holiday. The episode also teaches Hebrew words and meanings. It’s not quite an hour long, making it easy to watch for children with short attention spans.

A fairly new film, “Exodus: Gods and Kings” depicts some of the most grueling scenes from the Bible. You will intimately walk through everything from Moses (played by Christian Bale) dealing with his brother Ramses (Joel Edgerton) to the plagues that Egypt endured.

If you’re looking for something more raw and real, this movie directed and produced by Ridley Scott may be your best bet. At the same time, if you have young ones, this PG-13 film may not be the one for them, since some of the scenes can get pretty gory.

Paige Taylor is a journalism student at Abilene Christian University. She is taking part this spring in the New York City Semester in Journalism program at The King’s College.

Previous: CU Rise campaign is Good News for Harvard, Yale, Princeton and other Ivy League schools
Next: ‘May God make a miracle’: Millions flee Ukraine with prayers for war’s end