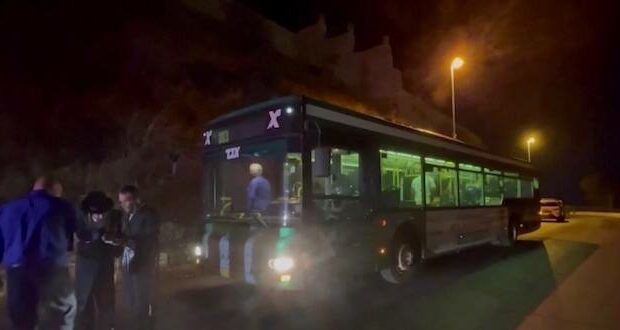 Five American Jews are recovering after a Palestinian man opened fire on a city bus in Jerusalem on Sunday.

The gunman, identified as 26-year-old Amir Sidawi, a resident of East Jerusalem, targeted a bus carrying Jewish worshipers who had just prayed at the Western Wall. The attack injured at least eight people, two of whom are in serious condition.

Two Americans were being treated at the Hadassah Medical Center and three at Shaare Zedek Medical Center, according to CNN, which said at least two of the Americans injured were tourists. A pregnant woman underwent an emergency cesarean section at the Shaare Zedek hospital, which described the condition of both mother and baby as serious.

“Our ambassador to Israel and U.S. officials in Jerusalem are in touch with the families of the U.S. citizen victims, to whom we have offered our sympathies and support,” Ned Price, a U.S. State Department spokesman, said. “Our team in Jerusalem has been working around the clock to support the victims and their families, and will continue to monitor the situation closely.”

The suspect initially fled the scene after firing but later turned himself in by asking a cab driver to take him to a police station.

“There is one conclusion from this incident, as from previous incidents: Whoever harms Israeli citizens has nowhere to hide,” Prime Minister Yair Lapid said in cabinet meeting. “We will pursue them, find them wherever they are and deal with them to the fullest extent of the law.”

One injured American, 22-year-old Menachem Palace from Brooklyn, N.Y., said he was in Israel with a group as part of a birthright trip, a free excursion to Israel offered to young Jewish adults across the world. He told Israeli outlet COLive he was not going to shorten his trip because of the attack.

“The trip ends on Thursday, and I plan to stay,” he said. “This is our land, the safest place in the world.”

Attacks on American tourists is extremely rare and virtually non-existent against Christian tourists say authorities. The bus of tourists was targeted because they were visibly Jewish with five being from the same family. Christian tours travel in motorcoaches which are easily distinguishable from Jerusalem busses.

Israel continues to be one of the safest cities in the world for tourists of all faiths, including Christian and Muslim tourists. Tours