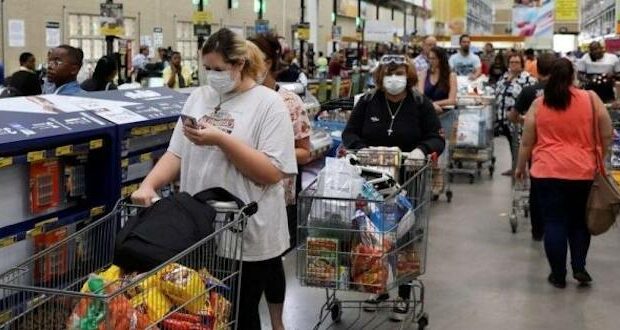 Shoppers have returned to normal in South Africa as the Omicron wave subsides with no deaths.

Americans are feeling more optimistic about the economy as Omicron doesn’t live up to the media hype. The news comes as scientists around the world criticize governments for scaring the public about a variant that has killed less than six people worldwide as of Dec. 23. On Monday, President Joe Biden again repeated his phrase that it will be a deadly winter.

The Omicron variant, which was first identified in South Africa and has since run its course there with no deaths reported as of Dec. 20, has also been detected in a majority of U.S. states with just one death. While the severity of Omicron cases of COVID-19, compared with others in the U.S., has been determined to be low, the CDC recently said the variant accounts for 73 percent of all new cases in the nation.

Ridhwaan Suliman, senior researcher at the South African Council for Scientific and Industrial Research, told CNN on Wednesday that the country has “surpassed the peak of the Omicron wave now, driven by the significant decline in the populous province and epicenter, Gauteng.”

This was echoed by one of the country’s top scientists, Dr. Michelle Groome of the National Institute for Communicable Diseases, who told a media briefing earlier on Wednesday that all indications show “that we’ve surpassed the peak of infections.”

Tim Spector, professor of genetic epidemiology at King’s College London and the lead scientist on the that nation’s ZOE COVID Study app, blasted the UK government for the “misinformation” in its latest stay-at-home guidance about COVID-19 symptoms.

The symptoms of Omicron positive cases “feel much more like the common cold,” a he said on Thursday as he warned that half of the people with cold-like symptoms now have COVID-19.

Spector said that data from the ZOE COVID Study “clearly shows that the most important symptoms are no longer a new continuous cough, a high temperature, or loss of taste or smell.”

“For most people, an Omicron positive case will feel much more like the common cold, starting with a sore throat, runny nose, and a headache,” he said, adding: “You only need to ask a friend who has recently tested positive to find this out.”

Spector said the government needs to “change public messaging urgently” as “half of people with cold-like symptoms now have COVID.”

Spector said that the number of new symptomatic cases has “exploded” over the last week, making it the biggest jump in cases he had seen since the ZOE COVID Study started.

But Spector said ZOE data is consistent with recent studies which suggest the severity of the Omicron variant is relatively mild.

“Whilst the figures paint a worrying picture, the good news is that our preliminary data, based on around 2,500 probable cases reported on the ZOE app suggests that Omicron is more mild than Delta,” he said.

The researchers also estimated that natural immunity, or protection from a prior infection, reduces the risk of hospitalization by 50 percent and the risk of a hospital stay of one night or more by 61 percent.

Scientists in a separate Scotland-wide study called Early Pandemic Evaluation and Enhanced Surveillance of COVID-19 said Omicron is associated with a two-thirds reduction in the risk of hospital admission compared with Delta.

Some scientists were optimistic by the data this week, saying that once Omicron runs its course, in which a majority of both vaccinated and non-vaccinated persons become infected, the pandemic will be over. With the donimnat strain remaining being that of Omicron, the virus will have mutated into a non-lethal annual cold.

Previous: “Christmas comet” expected to be visible tonight
Next: 12 Christmas movies to watch before New Years