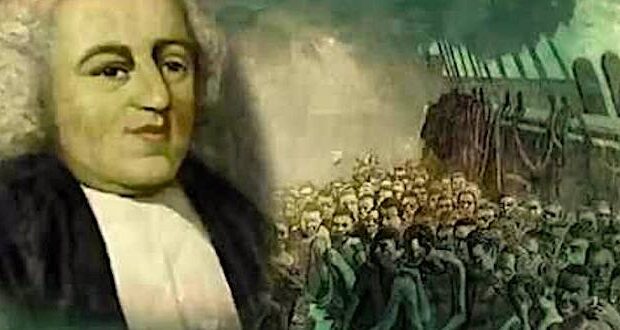 You’ve likely heard the famous hymn “Amazing Grace.” People the world over love the song. It’s been sung at countless memorial services, civil rights events, and churches. Recently, people in 50 different coronavirus-affected nations sang it together in an inspiring video: “Amazing grace! How sweet the sound that saved a wretch like me! I once was lost, but now am found, was blind but now I see.”

The writer of these words helped to abolish the slave trade, but were you aware of his racist past? I thought for a long time that I knew his real story, but I didn’t. It holds valuable lessons for today’s racial turmoil.

John Newton was an 18th-century British slave trader who had a dramatic faith experience during a storm at sea. He eventually left the slave trade, became a pastor, and wrote hymns, but there are some surprising twists: Newton only became a slave ship captain after finding faith in Jesus. And he left slave trading not for spiritual reasons but for health. Consider the rest of the story.

A self-described “free-thinking” rationalist, Newton negotiated with African chiefs to obtain slaves and even raped female slaves. He called himself a terrible “blasphemer” and embraced his self-identification as one who rejected God completely. But then, as Forrest Gump might say, God showed up.

A violent storm flooded his ship with water. Fearing for his life, he soon “began to think of … Jesus whom I had so often derided … of His life and of His death … for sins not His own, but for those who in their distress should put their trust in Him.”

In the coming days, he became convinced that Jesus’s message was true. “I was no longer an atheist,” he wrote. “I was sincerely touched with a sense of undeserved mercy in being brought safe through so many dangers. … I was a new man.”

Yet Newton saw no immediate conflict between slavery and his new beliefs. As a slave ship captain, he even held onboard Sunday worship services for his crew. Newton was still a work in progress.

Slavery was generally accepted as a pillar of the British economy, and for many years, few spoke against it. Newton biographer Jonathan Aitken observes that in 1751, Newton’s spiritual conscience “was at least 20 years away from waking up to the realization that the Christian gospel and human slavery were irreconcilable.”

A mysterious illness eventually ended his seafaring career. He then became a pastor and significantly influenced a young member of Parliament, who would go on help rescue an exploited people and a nation’s moral conscience. That man was William Wilberforce.

A rising political star, Wilberforce considered leaving Parliament for the ministry. In 1785, he sought counsel from Newton, who advised Wilberforce to remain in Parliament and became his mentor. An arduous 20-year effort to abolish the slave trade ensued.

In 1788, Newton declared in his widely circulated pamphlet, Thoughts Upon the African Slave Trade, “I hope it will always be a subject of humiliating reflection to me that I was once an active instrument in a business at which my heart now shudders.” Abolitionists sent copies to all members of Parliament.

Newton testified before important parliamentary committees describing chains, overcrowded quarters, separated families, sexual exploitation, flogging, beating, and butchering. The slaver, once blind to his own moral hypocrisy, now could see. Aitken says of it all, “Newton’s testimony was of vital importance in converting public opinion to the abolitionist cause.”

In early 1807, Britain outlawed the slave trade. Following Newton’s death on December 21 of that year, his gravestone bore his self-written epitaph: “John Newton: Once an infidel and libertine, a servant of slaves in Africa was by the rich mercy of our Lord and Saviour Jesus Christ preserved, restored, pardoned and appointed to preach the faith he had long laboured to destroy.”

Ultimately, we are all works in progress.

–Rusty Wright is an author and lecturer who has spoken on six continents. His film reviews and columns have been published by newspapers across the country and used by more than 2,000 websites.