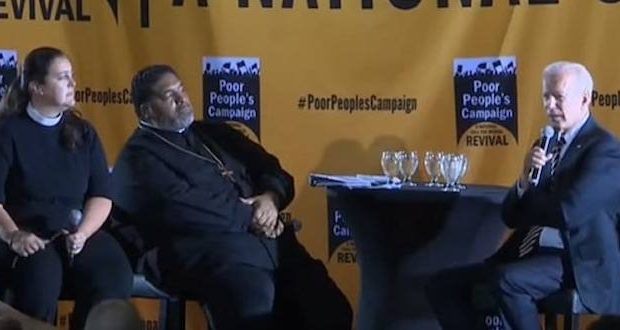 Without presenting actual data, former Vice President Joe Biden stated Monday a “physical revolution” could help overcome what he sees as Republican opposition to left-leaning poverty initiatives. He failed to mention the current record job growth and employment among Black and Latino families and women.

The 76-year-old Biden, who failed in his previous attempts to secure the Democrat nomination for president, was the first of nine 2020 office seekers to speak at a presidential forum hosted by the Poor People’s Campaign. It came during the three-day Poor People’s Moral Action Congress held at Trinity Washington University.

Hundreds of activists and clergy gathered in the nation’s capital for what they say is a “call for moral revival,” focusing on issues of poverty, climate change, voter suppression, wealth inequality and access to health care.

Many see the mention of health care as an admission that Obama Care has failed. The call to address poverty comes up regularly in support of Democrat candidates but has failed to acknowledge the millions of jobs gained and increased wages since the 2016 presidential election.

“Look at what is happening now, the reason why poor folks are poor is because of all those immigrants, all those Muslims, all those African-Americans. It’s a bunch of malarkey.”

Biden praised the Poor People’s Campaign for “picking up where it was left off by Dr. [Martin Luther] King” and for exposing the “exploitation” by those in power to get underserved populations to blame others for financial troubles.

The former vice president, who served under President Barack Obama, also repeated misinformation from the stage which was eagerly eaten up by the crowd, regardless if it lacked statistics to back it up. 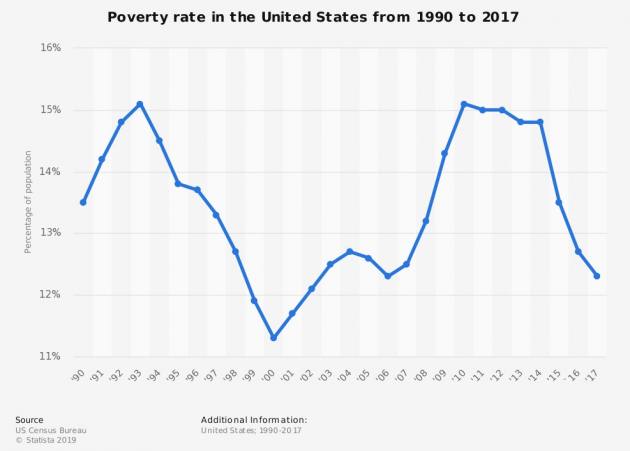 “The exploitation is more extreme than it has ever been because of the gigantic income inequality that exists in America,” Biden stressed. “It is bigger than any time since the turn of the last century.”

Economic data shows that, after rising in President Obama’s first term to almost record levels, poverty has continued to decline  under President Trump and is now approaching a record low set in the 2000s.

The current iteration of the Poor People’s Campaign, which takes the same name as the one launched in the 1960s by Martin Luther King Jr. and the Southern Christian Leadership Conference, was launched in 2018. It claims to be nonpartisan and connects thousands of interfaith religious leaders, activists, organizations, and persons impacted by poverty.

The campaign is co-chaired by Disciples of Christ pastor and NAACP civil rights activist Rev. William Barber and Rev. Liz Theoharis, founder of the Kairos Center for Religions, Rights, and Social Justice.

Barber and Theoharis were highly critical during the event of what they called heretical white “Christian nationalism” and policies passed by the Trump administration that they say make issues worse for impoverished communities.

None of the speakers mentioned recent economic data that shows more people, especially those of color, have been raised out of poverty by Trump administration economic policies and the current booming economy.

Without getting specific, he told the hundreds gathered in the university’s gymnasium that it is “ridiculous” that there are policies in place that he says discriminate against and devalue “black people, native Americans, people of color, women, LGBTQ individuals, people with disabilities, refugees, immigrants, asylum seekers” at a time when there are “deep inequities” in society. Biden did not address any specific policies.

Biden argued that it is in the best interest of “everybody” to bring people out of poverty and move them “into a place where they are able to compete” through access to housing, education and health care.

“It benefits the whole nation,” Biden contended. “We have to stop letting these guys use the divisions that exist in the country, like charlatans always do, to divide the country.”

Biden indicated his support for things such as a $15 minimum wage, making sure that everyone in the U.S. has access to Medicaid, increasing Title I spending for underprivileged schools from $15 billion to $45 billion per year.

The Poor People’s Campaign also published the “Poor People’s Moral Budget” on Monday. The document highlights several areas of the campaign’s agenda that includes the expansion of voting rights, increasing the minimum wage, investing in the Green New Deal, and shifting foreign policy “toward peace and diplomacy” and shrinking the size of the American military.

Barber has been praised by those on the political left but has received criticism over his support for the nation’s largest abortion provider Planned Parenthood. Black conservative Christian leaders, including Martin Luther King’s niece, blame Planned Parenthood for targeting black communities for abortion.

Critics of Biden’s speech were plentiful Monday, saying that Biden continues the time-honored Democrat Party tradition of  pandering to the poor in an effort to get votes–even to the point of imitating a southern accent in his speech.

Previous: Exhibit features Jewish jewelry in Arab lands
Next: Deportations will begin of a million whom courts have ordered to leave