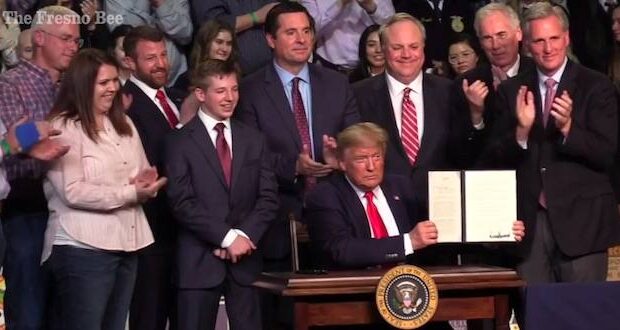 President Trump was flanked by famers and FFA students as he signed the water relief. Photo: Video screen grab.

California farmers have received relief in their decades-long battle with California Democrats and the Obama administration over the fight for water. President Donald Trump on Feb. 19 signed a memorandum to develop and deliver more water supplies in the Central Valley and Southern California.

Speaking to local farmers, FFA students and supporters in Bakersfield, the president called the state’s previous water policy a “disgrace.”

READ: Polls show historic Black and Hispanic support for Trump surging ahead of 2020

“After decades of failure and delays in ensuring critical water access for the people of this state, we are determined to finally get your problem solved. As a candidate for president, I promised to help the water crisis crippling our farmers due the chronic mismanagement and misguided policies,” Trump added.

The Trump administration, Republican lawmakers, and farm and water agencies say the changes will allow for more flexibility in water deliveries.

According to PBS, California’s heavily engineered water system is made up of giant state and federal water projects stretching a thousand miles in pipes, canals, pumps, and dams, crisscrossing the state to carry runoff from rain and Sierra Nevada snowmelt from north to south.

READ: How bees are disappearing around the world

Trump has long criticized the rules governing the flow of water in California, which were supposed to protect small population of certain fish and toads.

Supporters, mainly made up of farming groups, have hailed Trump’s proposal as a breakthrough that would provide much-needed water to California’s agricultural industry. The plan could also boost water deliveries to Southern California urban areas.

However, critics, including some radical environmental groups, are threatening lawsuits.

California farmers are joined by Republicans leaders and public support in their call for more water.

“I appreciate President Trump’s commitment to the biological opinions that support water delivery and sound infrastructure. This is an opportunity for the governor and the president to work together to support California’s farmers and families by investing in sound water projects.”

Previous: Helping vs. enabling: how to strike a balance while caregiving
Next: Doorstep’s Operation Soup Line fundraiser is back at Ag Hall